A Look Back at 3PK9 Take Off

It’s been a milestone year for the aviation industry – and for MSA Security. Today marks the one-year anniversary of MSA becoming a TSA-approved Certified Cargo Screening Facility Canine (CCSP-K9) company. Over the last 12 months, MSA has deployed dozens of its EDC teams, known as Windsor Teams, into TSA-regulated environments. Currently, 150 of MSA’s more than 650 global Windsor Teams are specially trained and prepared for air cargo industry deployment. And, more than 80 of those teams are TSA-certified and deployed at over 40 regulated sites.

The Right Fit for Cargo Screening

Simply put, there is no machine or technology that stacks up to a properly imprinted and trained canine when it comes to explosive detection. Canines offer versatility and cost savings in air cargo sort and freight environments and remain the safest, most effective and operationally efficient tool for cargo screening for several reasons.

The benefits and impact of canine screening are clearly demonstrated in MSA’s partnership with DHL Global Forwarding. Following a successful 2016 pilot that began in anticipation of the TSA 3PK9 rollout and one of the first of its kind, this partnership is now in its third successful year. Results are consistent with those of the Pentagon research project from the early 2000s – canine screening is more than ten times as efficient as other methods, including X-ray and explosive trace detection.

“After the successful pilot, there was no question as to the value. We deployed Windsor Teams as a secondary layer of screening and waited for the official launch of TSA’s 3PK9 Program. Just after that, MSA became certified as a CCSP-K9 provider and we seamlessly transitioned to using canines as the primary method of screening,” explains Timothy Upham, Security and Operational Resilience, Head of the TSA Program for DHL Global Forwarding. “Today, we have Windsor Teams deployed at many of our sites throughout the country and look forward to expanding this partnership to enhance operations and stay ahead of emerging threats,” he concludes. 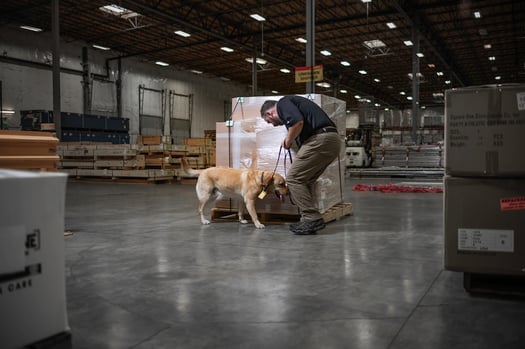 Windsor Team Anthony and Payton are one of the teams deployed across the 15 DGF sites nationwide. Like every Windsor Team, they are required to meet rigorous TSA CCSP-K9 standards which began with imprintation and training at our facility in Windsor, CT; one of MSA’s six ATF-licensed training facilities.  Every team receives training on all five families of explosives and homemade explosives (HMEs) – including TATP, HMTD, Potassium Chlorate, Ammonium Nitrate and Urea Nitrate.

With imprintation as an essential foundation for every explosive detection canine, MSA Windsor Teams deployed in a regulated air cargo environment train on high explosives every 30 days, keeping them at the top of their game. MSA’s final operational phase of training is a critical differentiator that determines the success of a team in the field. Here, training is fine tuned to best match the anticipated cargo setting, including the express model, freight forwarder environments and more.

The View Down the Runway

With 3PK9 well underway and aviation an ongoing international security priority, MSA remains at the forefront of the industry and is committed to meeting new demands. This includes an expanding international footprint with offices and training facilities in key global markets, the continued enhancement of solutions and the onboarding of proven subject matter experts.

MSA remains engaged with the industry, sharing valuable insight and expertise. As just one example, MSA maintains its membership in the Airforwarders Association, whose Executive Director, Brandon Fried, notes, "Security is a top concern for members of our association. Approximately 78 million tons of cargo was shipped in 2018 and regulations require 100% of that cargo to be screened for explosives. We are excited to have an experienced and validated provider like MSA Security join our association. MSA was a critical participant in the implementation of TSA's third-party canine screening program and is sure to enhance our preparation for 2021 ICAO mandates as well."