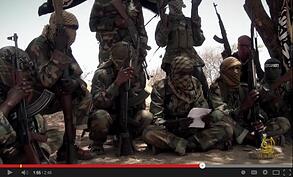 video which was posted to YouTube yesterday encouraging individuals to conduct lone wolf attacks in the West or travel abroad to wage jihad. The video was released through al-Shabaab’s media production arm the al-Kataib Foundation and is the latest of a five-part series titled, “Mujahideen Moments.” The video is the first of the series to be released in English and is less than three minutes long. It shows a group of masked, armed militants with one reading a poem, providing “youth in the West” with three options:

• Carry out a lone wolf attack in the West: “You put your trust in Allah and take your Istishadi (martyrdom) vest. A lone-wolf mission, you know the rest.”

• Travel abroad to join jihadist efforts: “You leave it all. Your whole dunya [world], and your backpack. What you need more? Hijra and jihad is the smart call, just like the brothers in Westgate Mall.”

• Do nothing and leave your fate to “Judgment Day:” “Deceived by the devil, you live amongst them, same job, same school. You befriend them.”

The video ends with the message, “Next flight to Mogadishu, the only one missing is you.” The airline ticket specifically calls out Minnesota as the flight origin, where there is a significant Somali population.

Since its inception, al-Shabaab has been focused locally by attacking military and government targets within Somalia. In recent years, the group has branched out with terrorist attacks in Uganda and Kenya, each with their own troops fighting alongside African Union forces against al-Shabaab in Somalia. Those countries also offer more Western targets than those available in their home country. Al-Shabaab has long desired to attack the U.S. homeland, but they seem to lack the capability to do so. The latest video is more in line with al Qaeda in the Arabian Peninsula’s strategy of inspiring Westerners to conduct lone wolf operations through its Inspire magazine series. It is also aligned with al Qaeda central’s message emphasizing lone wolf attacks, announced in the June 2011 video by Adam Gadahn titled, “Do Not Rely on Others, Take the Task Upon Yourself.”