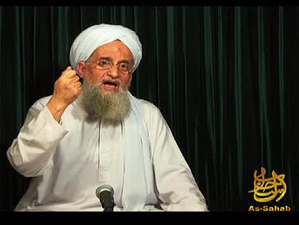 formation of an al Qaeda branch in the Indian subcontinent. The 55-minute video, titled, “War should continue, message to the Muslims of Kashmir,” has been spread on jihadist forums. The branch will serve Muslims in “Burma, Bangladesh, Assam, Gujarat, Ahmedabad and Kashmir.” Zawahri stated that the group will rescue Muslims in the region from injustice and “break all borders” dividing Muslim populations. Zawahri called for unity among jihadists and urged Muslims in the region “to wage jihad against its enemies, to liberate its land, to restore its sovereignty and to revive its caliphate.”

Asim Umar will be the leader of the new group, called “Qaedat al-Jihad in the Indian Subcontinent,” and Ustad Usama Mahmoud will be the spokesman. Umar and Mahmoud are believed to be militants currently serving al Qaeda in Pakistan. In the video, Zawahri also renewed a pledge of loyalty to Afghan Taliban leader Mullah Omar. Indian authorities have verified the authenticity of the video and put police on alert across the country.

Al Qaeda’s new video is widely seen as the group’s attempt to regain legitimacy, as well as a response to the rise of the Islamic State (IS) in the region. Although Zawahri does not mention IS by name, he is believed to have criticized them several times, such as stating that he wants to unify jihadists and keep focus on attacking western targets. Al Qaeda faces several challenges in India, including having to compete with IS for recruits. The IS has increased recruitment efforts in India over the past few months, primarily by releasing recruitment videos in Hindi, Urdu and Tamil. Historically, al Qaeda has not been able to attract a lot of support in India, but Zawahri’s strategy appears to be focusing on recruiting from regions with current unrest or a history of oppressing Muslims. In order to establish itself as an effective al Qaeda affiliate, the new group may seek to target western interests within the country.