During Monday's office building shooting in Grand Prairie, TX, a suburb between Dallas and Fort Worth, tenants were told to remain in place and lock their doors while police searched the building.

Students were also told to shelter in place during a recent school shooting event at Lone Star College in Houston, TX.

If the decision is made to shelter in place, MSA Security's Golden 15 Strategy, which includes best practices for enhancing security programs and surviving active shooter events, urges schools and other organizations to, know room hardening tecniques; understand cover and concealment; be mentally prepared to fight back; and have an unrelenting WILL to SURVIVE. 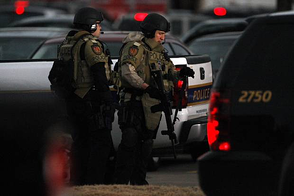 Reportedly, Grand Prairie gunman, Louis Anthony Davis, had prior knowledge of the building. Davis, who was taken into custody and later arrested, faces a charge of murder. Police are claiming this does not appear to be a random incident.

Remaining in place is only one response to a shooting event. For more information on Active Shooter response training and the Golden 15 Strategy contact MSA.