Johnny Rivera and his canine, Harvey, are one of MSA Security’s star Explosive Detection Canine teams, based in sunny San Diego. The pair joined forces in July, 2017, and have been keeping clients throughout the SoCal area safe ever since.

Johnny is a military veteran with nine years of experience in the U.S. Air Force. He began in the Military Police, conducting law enforcement activities throughout the base. This primarily included ensuring overall safety, gate access control, and emergency response. During his time in the MP, he was stationed in Ramsteinn Base in Germany, Bellows Air Force Station in Hawaii, and Mountain Home Idaho. He was also deployed for active duty to Southern Iraq’s Talil Air Base in 2003, and subsequently to the United Arab Emirates.

After seven years of dedicated service, Johnny was selected for canine school. He completed a three-month training curriculum at Lackland Air Force Base in Texas. He worked with both explosive and narcotics detection canines for two years, which included another tour in Iraq.

Johnny retired in 2009 at the rank of E5 Staff Sargent with a meritorious service award. The most challenging aspect of military life for Johnny was finding time for himself in a regimented environment with very long days. And though you can try to plan for every eventuality, in the military, he learned how to expect the unexpected and act accordingly.

Following his military career, Johnny worked in the private security industry for another two and a half years, again as a canine handler, before joining MSA. His significant experience with working dogs made his transition to MSA a natural next step. When he arrived for training at MSA’s facility in Windsor, Connecticut, he felt fully prepared and ready to go. “I was impressed that the training closely resembled the military’s in its scientific and technical precision,” Johnny noted. “The primary distinction was in the food reward method as opposed to play reward.”

Johnny was paired with EDC Harvey, the second in the MSA’s fleet, and not to be confused

with Harvey Senior, who is paired with West Coast Supervisor, Jaime Randall. “Little Harvey,” as he is playfully dubbed, is a two year old Black Labrador Retriever. Johnny is his first handler and the team hopes to work together for the duration of Harvey’s career – likely another six to seven years.

When not working, Harvey loves his rest and relaxation, sleeping his days off away. He lives with Johnny and his family as well as a French Bull Dog. When time permits, Johnny and Harvey venture on hikes throughout San Diego, and enjoy the outdoors every chance they get. 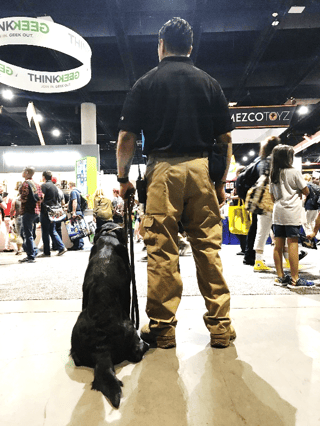 Johnny and Harvey at Comic Con in 2017