Congratulations to our 500th handler and canine team, Tanner and Sylvia, for graduating from our Windsor Program in July! Out west, Tanner Grutz and his Canine, Sylvia cover a lot of ground supporting clients in the Sports and Entertainment venues primarily throughout Las Vegas and Southern California as needed. The newly partnered team has already formed a close bond, and has been proudly representing MSA Security for just over a month as they return home to Las Vegas from Windsor, Connecticut.

Tanner has a reputable military background as a veteran of the Air Force; he joined at the age of 17. Throughout his time in the Air Force, Tanner worked in Corpus Christie, TX as a recruiter, then transitioned to the canine unit where he led initiatives and trained units for increasing deployments. He supported state-side initiatives for the president, his office, and affiliated dignitaries. In addition, Tanner has quite an impressive history as a dog handler. In 2012, he was promoted on-the-spot by his base commander to the highest position in the kennel department. Tanner managed the largest combat kennel in the command, and as a result, he explains that the most difficult part of his day-to-day job was bearing the responsibility for seamlessly managing and deploying 13 dogs and 20+ personnel on his team. In 2014, he retired at the rank of Technical Sargent.

After retiring from the military in 2014, Tanner and his fiancé, Athena, started their own company, Best 4 Paws LLC., where he specializes in training dogs that support people living with Type I Diabetes. He was approached by Diabetic Alert Dogs because they knew that he had experience training dogs in the military. Tanner felt compelled by the company’s mission, and knew that he was the right person to help the cause. It is a rewarding job each day to train dogs to help people and be able to use a specific set of skills to help others and potentially save lives. They work to train dogs that they get from AKC Breeders and train dogs from all over the United States. Tanner’s canine experience in the Air Force enabled him to be a successful as a canine trainer as he has delivered dogs to clients all over the United States.

Sylvia is an American yellow Labrador who will have her second birthday in October, and like most working dogs, Sylvia is trained for “food reward” work. While she isn’t picky about food or treats, Sylvia’s favorite toy is a tethered ball on a rope. She loves attention and spending time with Tanner and Athena who will be tying the knot in October of this year. 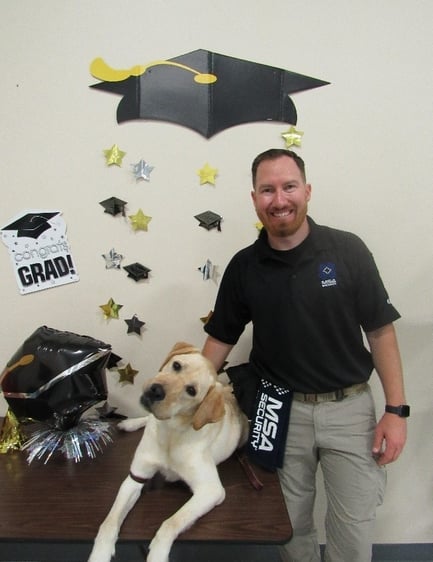 Tanner and Sylvia at graduation in Windsor, Connecticut