If you look, you can find MSA Security’s Explosive Detection Canine teams working and playing in all corners of the country. Up in Buffalo, New York, Rachel Weiner and her Canine Ringo support a client in the Air Cargo industry. The team has a close bond, and have been proudly representing MSA Security since July 2016. 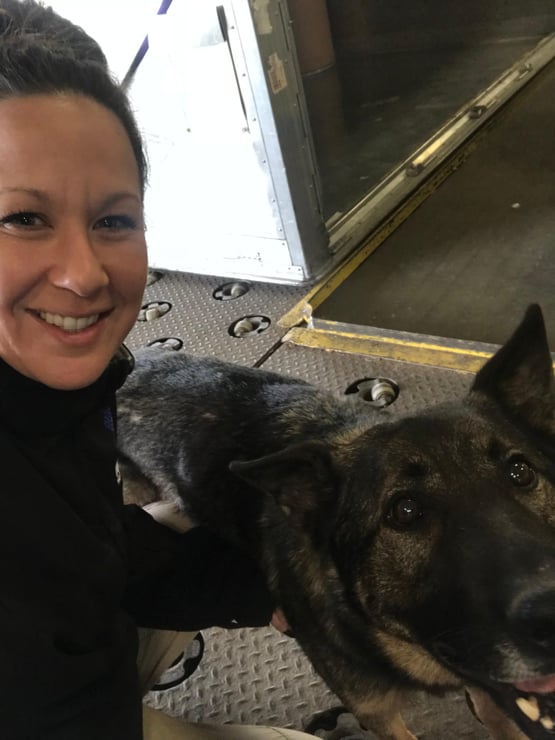 Rachel and Ringo, ready for work!

Rachel hails from the UK, and is a veteran of the Royal Air Force. She retired at the rank of Corporal after 6 ½ years of service as a military canine handler. At home in the UK, Rachel was based in Brize Norton, Oxfordshire and attached to different military units over the course of her career. In 2012, she deployed to Afghanistan where she met her future husband, Rob, and her military canine, Izzy. In fact, Rob and Izzy came as something of a package deal – Rob was deployed with the contracted canine provider, working in the field as a canine trainer. Izzy was a smart and loving black lab, and in Rachel’s words, “the best friend I’ve ever had”. When Rachel’s tour ended, Izzy remained in Afghanistan to continue work with a new handler, but Rob kept a close eye on her. At the end of Izzy’s deployment, she returned to the UK and continued working as a military demonstration dog. 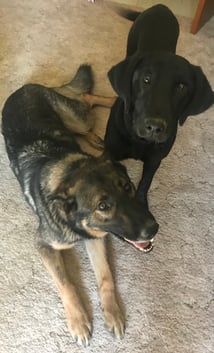 Rachel's military background was terrific preparation for her current canine handling role with MSA Security. She gained thorough knowledge of canine handling and explosive detection work, which was reinforced during training with MSA. During this training, Rachel was paired with her current MSA partner, Ringo, a 3 ½ year old German Shepherd. Like most working Shepherds, Ringo is trained to for “play reward” work. This means he loves to work, nearly pulling Rachel off the ground with excitement them moment he sees their work site. Working in the Air Cargo industry, the team underwent training for all operational environments, with specific focus on Air Cargo. They complete NAPWDA and DOJ NORT Certification every year.

After a long day, Rachel and Ringo return home to their family. Rachel has three children – ages 16, 15, and 2 ½. She and her husband also have a canine family of seven other dogs. In addition to Ringo, they have another German Shepherd, a French Bull Dog, and five Black Labs. Luckily up in Buffalo, they had room to build their own, kennel and plenty of space to run around. Needless to say – Ringo rules the roost. He’s the alpha dog of the pack, with a compassionate streak, tending to one of the family’s black lab puppies as his own. He’s is as sociable as can be, making friends – human and canine – with everyone he meets.