Explosive Detection Canine team operations have run smoothly despite the discourse the pandemic has placed on our nation. The continuations of efficient site visits at commercial and cargo locations are done so on the account of unparalleled training and capabilities of EDCs and their exceptional handlers. Catherine Gottlieb, an EDC Handler in the Philadelphia area was linked with EDC Paris in 2018 at the Windsor Training facility in Windsor, Connecticut.

Catherine and EDC Paris have performed site visits at cruise terminals in NYC and air cargo locations in the Philadelphia area. The team is currently deployed to an air cargo location where they screen outgoing cargo. With EDCs, teams are capable of finding and responding to the presence of explosive odors that fall in to the five families of explosives that the EDC’s are imprinted in, cutting screen time in half. The MSA Security explosive odor detection training method prepares dogs in four phases.

Breeding: Selection of the best-in-class sporting breeds with a keen sense of smell, strong drive, intelligence, stable temperament, and eagerness to please.

Imprintation: MSA dogs begin comprehensive olfactory training where they learn to sniff out 32 different explosive odors with a “sit” alert response. Dogs are training utilizing either food or play rewards depending on their individual interest. (EDC Paris prefers celery and carrots.) 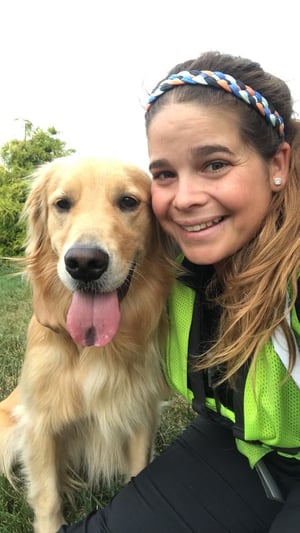 In order to carry out and reinforce this training, the dogs must be linked with handlers that they can trust. It is to be noted that Catherine and EDC Paris have never failed an audit or certification to date. Aside from their partnership at work, Paris and Catherine wake up, commute, take walks, eat, and end their days together. They have created a bond that is apparent to their supervisors and to their client deployment location.

Before working at MSA, Catherine pursued higher education and later on enlisted in the U.S Navy Reserve. After receiving her master’s degree in Criminalistic Science at Drexel University, Catherine enlisted in the U.S Navy Reserve. Upon completing boot camp, she attended and graduated Fire Controlman “A School”. Jointly, she received training in weapon and missile systems, privacy and information handling, threat detection, bomb detection, and other basic military tactics.

From a young age, selflessness and the desire to help others has truly been a part of who Catherine Gottlieb is. It all started from a 3rd grade “Star Student” project. When asked what she wanted to be when she was older, she confidently wrote down a rather obscure answer in comparison to the many aspiring teachers and soccer players in her class. Catherine Gottlieb, 3rd Grade Star Student, soon-to-be Soldier. In 2015, this 3rd grade affirmation came true. Catherine Gottlieb enlisted in the U.S Navy Reserve. Her training, boot camp, and time serving have played a vital part in her success today. Catherine continues to aid the mission of delivering operational capabilities for the Navy Reserve all while maintaining security and deterrence as a top performing EDC Handler at MSA Security.

Phased reopening and civil unrest events have required enhanced precautionary measures for the entire MSA Security team. EDC operations and training have continued to meet the highest level of performance standards. Catherine Gottlieb deployed in the Philadelphia area, is well equipped to adapt to any of these changes due to her highly credible experience. For MSA Security, she is responsible for screening outgoing cargo with her partner and best friend, EDC Paris. Together they have built a remarkable relationship with the client based on a foundation of professionalism and an admirable work ethic.