Experienced team member of Homeland Defense Missions, Stephen Blanchard was recently promoted to Field Supervisor at MSA Security’s Seattle training facility. On the west coast, as the first Field Supervisor dedicated to Washington, Oregon, Colorado, Utah, and Alaska, Stephen supervises all Explosive Detection Canine teams while functioning as a vital member throughout the growth of this region. Conducting searches, checking in on handlers, and liaising with clients, Stephen is trustworthy, dependable, and a true leader. All the qualities MSA Security highly commends.

Before MSA, Stephen served in the US Army for six years. During his deployment, he conducted improvised explosive device (IED) response, post-blast analysis, and trained coalition and foreign forces. He also served as a valuable team member clearing suspicious packages, explosive materials in support of military, state, and federal law enforcement. During this time he completed over 240 hours of training becoming proficient in detection, identification, evaluation, render safe, and disposal of various types of ordinances. Additionally, he attended extensive training in Counter Radio Controlled Improvised Explosive Device, electronic warfare (CREW), a device used by the U.S. Military to provide a tactical advantage over specific explosive devices. This course focused on company level CREW and electronic warfare, EW Operations. 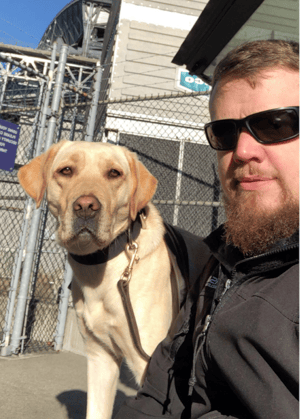 In 2019, Stephen attended the Windsor Canine Program Training at our facility in Windsor, CT where he was paired with his canine, Beacon. One year later, in anticipation of their deployment to an air cargo facility, the team completed additional training and certification under the TSA’s certified cargo screening program-canine (CCSP-K9). Beacon and Stephen are now third party canine certified (3PK9). This program fulfills the requirements for the use of third-party canines in aviation security. With MSA Security for a little over a year, he has traveled to multiple states along the west coast, including Alaska.

Amid these unprecedented times, Stephen’s accountability and preciseness is of high value in a supervisory role. MSA Security is taking the necessary steps to ensure that communication with field employees is clear and prompt through Intel alerts, email, and text notifications. With mandated social distancing orders, Stephen maintains contact with all of his EDC teams over phone check-ins. As an EDC Supervisor, he continues to find answers for his teams to the pressing questions regarding travel restrictions, schedule changes, and updates from clients. We thank Stephen for his exemplary work and are happy to have him as part of the team!