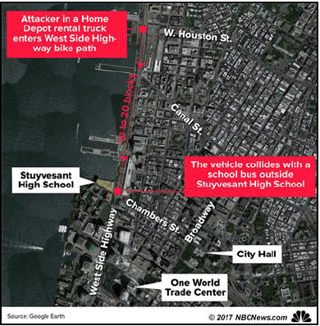 Side Highway bike path in Lower Manhattan yesterday in what officials are calling “New York’s deadliest terrorist attack since 9/11.” According to authorities, 29- year-old Uzbek national Sayfullo Habibullaevic Saipov rented a truck from a Home Depot store in Passaic, New Jersey (NJ) early Tuesday morning. At around 3:00pm local time that same day, Saipov drove the truck onto the bike path near Houston Street. Saipov then continued to drive down the bike path, hitting cyclists and pedestrians, until he collided with a school bus near Chambers Street. Saipov then exited his vehicle with a pellet gun and a paintball gun and reportedly yelled “Allahu Akbar” (“God is Great”) a number of times before firing his “imitation weapons.” A police patrol in the area returned fire at Saipov, striking him at least once in the abdomen and then arresting him. Saipov was transported to a local hospital for his injuries. Police later discovered multiple knives in the truck and a note written in Arabic by Saipov stating that he claimed allegiance to the Islamic State of Iraq and the Levant (ISIL).

Reports indicate that Saipov came to the U.S. from Uzbekistan in 2010, and lived in Ohio and Florida before settling in Paterson, NJ. Saipov is married with three children, and his wife, who denied having prior knowledge of the attack, is reportedly cooperating with authorities. Their home is currently being searched by authorities, as is Saipov’s electronic devices. Saipov has been linked to a number of social media accounts that reportedly contained “ISIL-related material.” Authorities are also investigating whether Saipov was radicalized in the U.S. or prior to coming here in 2010, as well as if he had visited Uzbekistan since 2010. There are several Islamic extremist groups in Uzbekistan, including some that have pledged allegiance to ISIL, such as the Islamic Movement of Uzbekistan (IMU). Saipov was an Uber driver for six months prior to yesterday’s attack, and Uber is cooperating with authorities as well. Saipov did not have an extensive criminal background; however, he was allegedly “on the radar” of authorities.

The 2016 vehicle attack in Nice, France launched a wave of terrorist and ISIL-claimed vehicle attacks worldwide, to include attacks in Ohio, Berlin, London, Paris and Barcelona. Terrorists are increasingly relying on low-sophistication tactics, such as vehicle-ramming and small-arms attacks by lone-wolf sympathizers, to kill and injure large groups of people without easy detection or intervention. According to reports, Saipov had been planning yesterday’s attack for weeks. While it appears Saipov followed ISIL instructions on how to carry out such attacks “to a T,” there is no indication he was contacted by ISIL or that yesterday’s attack was part of a larger plot. Lone-wolf terrorism is not a new tactic, nor is it confined to Islamic terrorism, but the current threats have taken on new urgency as ISIL, in particular, has harnessed the wide-ranging capability of social media to inspire individuals to commit violence.

In many cases, assailants themselves are active on tech platforms such as Google, Facebook, and WhatsApp prior to carrying out the attack. This trend is continuing to emerge, as exhibited in recent terrorist plots and attacks. The threat has moved from large-scale, complex attacks that involved scores of people and extensive planning and training, to a disseminated movement of newly radicalized individuals planning random capricious attacks across the globe. The evolution of jihadist tactics are no longer geographically isolated, and the internet has given these individuals a global platform and training ground.

The recent uptick in vehicular attacks appears to have been in large part inspired by ISIL’s explicit calls to employ cars as weapons. In May 2017, ISIL released a video instructing how to carry out a vehicle attack, and targeted U.S. based locations, such as New York City’s Time Square. The U.S. Transportation and Security Agency (TSA) issued a warning to truck and bus companies and encouraged them to be vigilant about potential vehicular terrorist assailant indicators, such as modifications to vehicles, which may suggest a vehicular terrorist attack. The TSA has also encouraged the use of vehicle barriers to prevent vehicles from accelerating into populated areas, protecting large crowds of people from attacks at outdoor venues like concerts, sporting events and holiday markets.