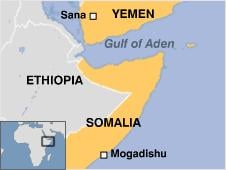 m presented an impact analysis to New York's InfraGard on the expansion of U.S. Drone Strikes to Somalia. Particular attention was paid to a potential alliance between terrorist groups AQAP and al-Shabaab. Collected intelligence suggests that some members of al-Shabaab have been working more intently with al Qaeda operatives, to expand their operations outside of Somalia.

This potential alliance is particularly significant because some US military and intelligence officials consider al Qaeda-affiliated groups in Yemen and Somalia a greater threat to America than the al Qaeda operatives based in Pakistan.  The US included Somalia and al-Shabaab as a focus of counterterrorism operations in its 2011 National Strategy for Counterterrorism released on June 28, 2011.  Al-Shabaab has been of increasing concern to US counterterrorism officials over the last year as it has been more focused on attacking targets outside of Somali borders and continues to threaten attacks against the US.  Combining efforts with AQAP, who the U.S. considers to be a top threat, could potentially give al-Shabaab an even greater capability to evolve its operations beyond Somalia.

Aside from staging attacks, al-Shabaab has been able to successfully recruit Westerners in its operations.  For instance, one of the group’s senior members is the American-born Omar Hammami who grew up in Alabama, but is now believed to be hiding in Somalia and has appeared in multiple al-Shabaab propaganda.  Additionally, the U.S. Justice Department charged 14 people within the country with providing support to al-Shabaab in August, 2010.

Moreover, Somalia has just been named the number one failed state in the world for a fourth year in a row, according to the Fund for Peace’s 2011 Failed State Index.  It was placed as such due to “widespread lawlessness, ineffective government, terrorism, insurgency, crime, abysmal development and piracy.”  As we have seen with AQAP, the instability and political crisis within a country can bolster the efforts and capabilities of insurgencies. The dangerous conditions in Somalia have even caused the U.S. to rely more heavily on proxy forces within Africa to combat terrorism in Somalia, including peacekeepers from the African Union.

Given the recent setbacks of al Qaeda central, including the death of Osama bin Laden, we assess that affiliated groups to the organization may be feeling more pressure to act on their own, or collaborate with others who share similar goals and can enhance one another’s capabilities.  In the case of AQAP and al-Shabaab, the close proximity of their networks also works in their favor.  The potential collaboration between the two groups will no doubt be further scrutinized by intelligence analysts.