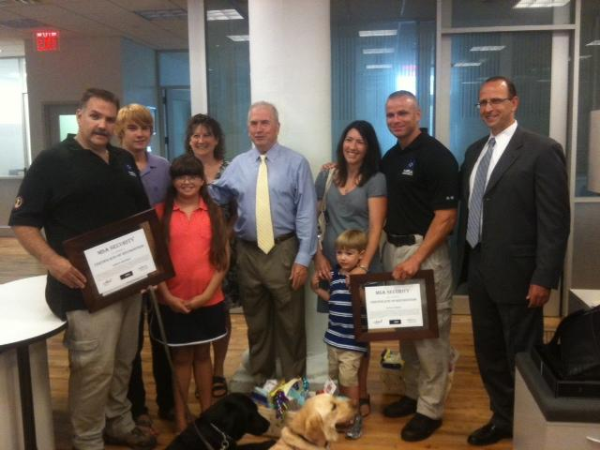 Today, Thursday July 21st, MSA Security hosted an honorary luncheon to recognize the admirable actions taken by Canine Handlers Pete Cunneen and Robert Brennan on July 9, 2011.  These two employees saved a 54-year-old man’s life when he suddenly collapsed to the ground, going into cardiac arrest at the Staten Island Ferry's Whitehall Terminal bicycle holding area. They administered CPR and utilized an Automated External Defibrillator after which the man regained consciousness and was transported to the hospital in stable condition.

Families of the Canine Handlers as well as MSA Security employees attended the event and congratulated Cunneen and Brennan on receiving letters of commendation for their actions.  Both of their bomb dogs also received a thank you in the form of a well-stocked gift basket. It was a memorable day for MSA Security.