The majority of requests received for image review in the SmartTech Emergency Operations Center (EOC) are for suspicious packages containing basic electronic items. The following images, compiled from various X-ray security scanners, are perfect X-ray Security Training tools which reinforce that screeners should pay careful attention to not only component identification, but how these components are packaged.

If you are using threat detection equipment in your mail room screening operations or elsewhere in your facility, share these images with your screeners as an example of continuing education on security X-ray analysis.

In training, many frontline screeners are taught that cylindrical objects with wires many be pipe bombs. The image above has several objects that can be used to make an Improvised Explosive Device (IED) including batteries, light bulbs, wires and cylinders, but they are in separate packages. Unless they are all going to the same person who is going to build an IED, this batch of packages can be cleared. 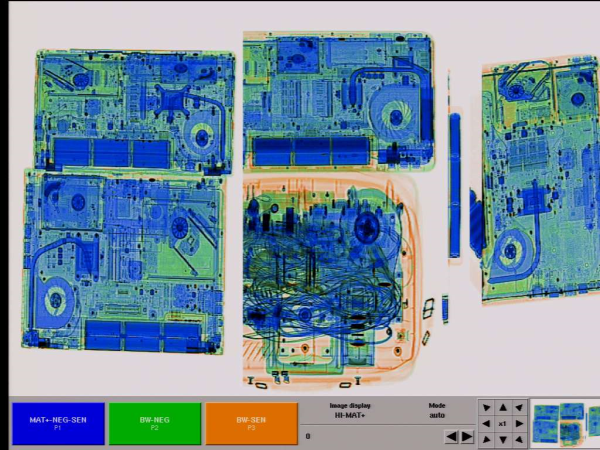 Thick electronic items continue to be hard to screen. This is especially true when associated power cords and chargers are included in the X-ray image. Look at the X-ray that shows several laptops. See how the “laptop alone” image is easier to clear than the “laptop plus” image.

Threat detection equipment out there continues to be reviewed for newer and better applications including IED component recognition. We found the next image online from one vendor, and it should clearly be seen as a potential “bomb in the box.” The discernable components include batteries, unusual wiring, a spring loaded switch (mouse trap), two cartridges of possible explosives and a possible blasting cap between them. That all adds up to a possible explosive device. Nice training picture!

The team of subject matter experts in the MSA EOC work in real-time with your on-the-ground screeners to provide 24/7 support.