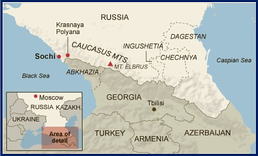 Over one million people are expected to attend the 2014 Winter Olympics in
Sochi, Russia from February 6 through February 23.  The Coastal Cluster, or Sochi Olympic Park, consists of 14 venues with the capacity to hold a combined 82,000 spectators. Terrorist attacks at sporting events are not uncommon.  Internationally, there were 168 terrorist attempts at such events between 1971 and 2003, including the 1972 Munich Olympics attack and the 1996 bombing at the Atlanta Olympic Games.

Russia has experienced a significant amount of terrorist activity in the past decade, many occurring in the country’s North Caucasus region. Notable and recent attacks include:


Russia is notorious for human rights violations as well as censorship of the press. Consequently, athletes wishing to use their platform to speak out against Russia’s controversial laws will only be permitted to do so from accredited areas. The International Olympic Committee has confirmed Sochi organizers will provide “protest zones.”  Prior to hosting the Winter Olympics, legal protests required approval from the Kremlin and illegal or unapproved protests were responded to with harshness and severity from Russian authorities.

For more threat updates on the 2014 Winter Olympic Games in Sochi, follow us below!
​