After working across the all over the United States, this featured Explosive Detection Canine team is now stationed in the south in Memphis, Tennessee. MSA handler, Ahmed Ali and his canine, Rawhide, work hard protect and support the air cargo industry. They work at various client sites with 7-8 other teams screening cargo for mostly international flights. The pair has a close bond, and has been proudly representing MSA Security since six months.

Prior to working with MSA, Ahmed served in the Army as an Engineer. He was inspired to 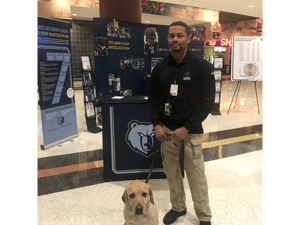 enlist because he wanted to follow in the footsteps of his father; this was something that he had always considered since he was a child. For the majority of his career in the Army, Ahmed was stationed in Fort Hood, Texas before he spent time in Iraq. He describes his duties as an Engineer to be fairly routine as he completed vehicle and facility maintenance, and routine PT. Additionally, the role of engineers in the Army Infantry entails destroying enemy supply routes or creating routes for U.S. soldiers to safely get to their sites. Most often this meant clearing routes for any IEDs or other potentially harmful explosives. As most soldiers would attest to, the hardest part of being in this job for Ahmed was being away from his family. However his hard work and time away from his family paid off as he honorably left the Army with a Combat Action Badge and an Army Achievement Medal.

Throughout his career in the Army, Ahmed always worked with canines. His engineers unit frequently worked with canines and had canines attached to their detail. He mentioned that he always enjoyed observing the relationships between canines and their handlers while on their missions, and he often played with the dogs.

His military background was terrific preparation for his role with MSA Security because he had exposure to working with explosives as an engineer and he worked with canines day-to-day. Prior to working with Rawhide, Ahmed worked in Lower Manhattan and screened vehicles for explosives with canines which seamlessly aligned with his experience in the Army. 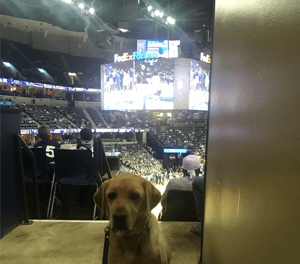 Rawhide is a yellow Labrador who is four and a half years old from MSA’s Windsor Program and completed training in Connecticut. Like most working Labradors, Rawhide is trained for “food reward” work, but that doesn’t mean he will turn down an opportunity to play. When he isn’t hard at work, Rawhide loves to roam outdoors with Ahmed’s three children and play tug-of-war with ropes. Ahmed always tries to play outside as a family with his kids and Rawhide and takes them rock climbing, go-karting, and enjoys any other physical activities that his children enjoy. In what little free time he does have for himself, Ahmed likes to watch New England Patriots football and workout at the gym. Ahmed and Rawhide hope to work together for another three to four years.