Play ball! Fans of every age are filling ballparks across the country to enjoy America’s favorite pastime. While they grab their hotdogs and popcorn to root for the home team, MSA Security’s Explosive Detection Canine (EDC) Handler Cameron Grissinger and black Labrador Abigail are hard at work keeping everyone safe. The duo is deployed at Minute Maid Park, home of the Houston Astros, and among hundreds of MSA EDC teams deployed at sports stadiums to perform effective, non-intrusive crowd screening for explosive threats.

The two paired up in April 2019 when Cameron joined MSA. Before beginning their deployment, they trained at the company’s flagship 75,000-square-foot training facility in Windsor, Connecticut. There, MSA bomb sniffing dogs like Abigail are trained on live explosive odors and imprinted on all five explosive families and homemade explosives (HMEs) – including TATP, HMTD, Potassium Chlorate, Ammonium Nitrate and Urea Nitrate. They become experts at detecting even a trace amount of explosive odor lingering in the air and tracking it back to its source, making MSA canine teams the right solution for security at crowded venues like sports arenas. In addition to Windsor, MSA currently has six additional ATF-licensed training centers throughout the country. This ensures MSA EDC teams are trained and tested on live explosives as often as once a month. Regular exposure to live explosive odors is critical to maintaining a working dog’s capability.

Cameron underscores the importance of consistent training. “Abigail is a great partner because she loves to work and train. I consider her to be an extension of me, so I prioritize daily training and believe in building independence in the dog. I want Abigail to be active without my help,” explains Cameron who carries out an explosive odor detection training session each day outside his apartment complex with a food reward that keeps Abigail highly motivated. “Your dog will sell you out pretty quickly if you, as a handler, are not at the top of your game. I put in the work.”

That dedication is recognized and appreciated by the 12 other MSA EDC teams they work alongside at the stadium, as well as MSA’s client. In fact, Cameron was recently recognized as Employee of the Month by the ballpark. “It’s a real honor to be noticed for your work and I am thankful to my supervisor for sharing her knowledge and experience with me so I have the ability to continually grow,” says Cameron. 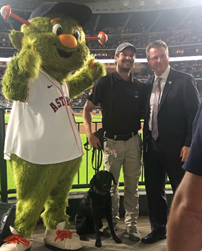 Before joining MSA, Cameron served as a master-at-arms in the U.S. Navy responsible for harbor patrol law enforcement, security and protection. Joining at a young age, he credits the Navy with instilling a greater level of independence and maturity. “You grow up quickly in the military when you’re given so much responsibility and assigned to deployments in countries you’ve only ever read about,” he says. He first served in an antiterrorism unit in the Kingdom of Bahrain in the Middle East and then took assignments in Italy and Japan. 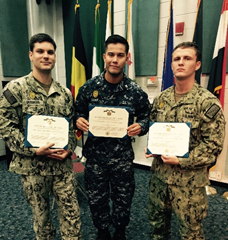 “I am proud to have served my country and consider myself  fortunate for the many life lessons, skills and friends I made during those years. The discipline, readiness and ability to work well under pressure are qualities that I rely on today as a canine handler in a high threat landscape,” shares Cameron.

Cameron Grissinger (left) with fellow servicemen in the U.S. Navy

Although training and working keep Cameron extremely busy, with a homestand lasting for up to ten straight days, there is only one way to unwind on that rare day off if you ask Cameron – and that is hitting the links for a relaxing game of golf!