Daniel Palazzo currently works with MSA as an Explosive Detection Canine (EDC) handler, bringing with him three years of military experience. After being commissioned out of ROTC at Niagara University, Daniel joined the National Guard where he was an Engineer and Lieutenant. He also served as a platoon leader, where he trained with IED threats and route clearance. Still, Daniel says he “always wanted to work with a dog,” a desire that led him to MSA.

In November of 2014 Daniel joined the MSA team as a canine handler and was paired with Riley, a 3 year old, food reward, yellow English Labrador. Riley came to MSA from Puppies Behind Bars, a program in which prison inmates to raise dogs that go on to be service dogs for veterans, or in Riley’s case, to become Explosive Detection Canines.

After graduating from the Puppies Behind Bars program, Riley graduated from MSA’s training facility in Windsor, CT and began his work as an EDC for MSA, where he’s been extremely successful. Daniel is impressed with Riley every day, and he’s not he only one. Daniel and Riley encounter a lot of people on the job and Daniel admires that “everyone loves how well behaved he is”. He went on to praise Riley as a great K9 partner - he is undisturbed during car rides, comfortable with flying, and keeps calm around other dogs on the job. The two have worked a number of locations including major performance and sporting venues, and events including major races across the country.

Daniel and Riley taking a break during a long work day!

While he enjoys and feels rewarded by his job, Daniel is not blind to the challenges of working with a dog. He explained that he was surprised to see how many people misinterpret the role and experience of a working dog. He recalled instances when strangers had approached him with concerns about the life that Riley has as an EDC. What they don’t realize, Daniel says, is that “we treat these dogs like gold!” MSA’s canines live at home with their handlers and are considered family members when they are off duty. Daniel elaborated that Riley, like all of our dogs, is never kenneled and doesn’t miss out on any of the love, play, or affection that a non-working dog would have.

In fact, while Riley is a focused, hard worker, he is also a lovable, playful lab with a big personality. “He runs the show,” Daniel says lovingly of his partner while mentioning Riley’s tendency to roll on his back and demand attention whenever he feels tired or overwhelmed. At home with Daniel, Riley’s favorite snacks are peanut butter and bananas. He loves to play with his snake toy, and has a certain affinity for slippers. Daniel was happy to describe Riley’s kind nature, elaborating that while most dogs enjoy ripping up stuffed animals, Riley prefers to carry them around gently in his mouth. Still, his high energy, puppy-like personality does come out from time to time, especially when he gets the chance to spend time with the family dog Lexi, a Maltese-poodle mix. Daniel laughed as he spoke of Riley’s interactions with his 5 pound friend, saying that Riley matches the dog’s puppy personality when they play together. 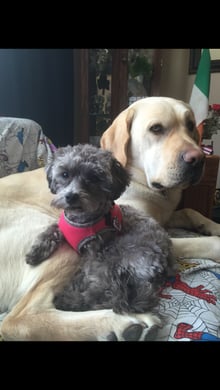 Riley with his pal, Lexi

Riley has a long career ahead of him that will include success, belly rubs,  and lots of love! Be on the lookout for more pictures of Riley and Daniel as the years go on!”