MSA’s EDC program continues to grow every month. Joe and his EDC Rosa are one of the newest additions to the team. The two completed training together in January of this year and have been working throughout the NYC area ever since.

Joe comes to MSA with 13 years of law enforcement experience as a Corrections Officer with the Middlesex County Department of Corrections in New Jersey. He worked at the county prison pretrial holding facility, and was often responsible for inmates while at courts and hospitals.

I became a corrections officer at only 19 years old. Learning how to deal with experienced criminals while I was still young and inexperienced was a challenge. The learning curve was steep, and I had to adapt quickly. Thankfully this taught me how to think on my feet and how to manage people well, skills which I use in my current position as a handler with MSA.

Over the course of his law enforcement career, he gained a detailed understanding of the judicial process, watching it unfold from beginning to end. Among the many skills he gained, Joe says the one he uses the most in his current role as a handler is his ability to pick up on suspicious behaviors and body languages. Furthermore, he utilizes his learned ability to work with the public and to overcome fear or distrust of security and law enforcement figures.

Joe was injured in the line of duty and retired in 2001. He spent the next several years working as a licensed realtor, and subsequently as an Operations Supervisor for Continental, and then United Airlines. While at United he managed over 100 employees, and oversaw the operations of safety protocols, arrivals, departures, and manpower. He was entrusted with escorting high profile celebrities and dignitaries, coordinating with the Port Authority, Customs, and Secret Service. Joe’s commitment to public service continued outside of his 9-5. He served as a volunteer firefighter in his New Jersey hometown for 17 years. 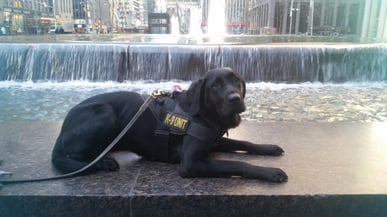 Joe joined the MSA canine team in January of this year. He was paired with Rosa, an American black lab pictured above. Rosa came to MSA from Guiding Eyes for the Blind. She was imprinted on a wide range of explosive scents at MSA’s training academy in Windsor, CT. She and Joe were then paired together before completing NAPWDA and DOJ NORT training. Joe praises Rosa as being attentive and intuitive. “She demonstrates her excellent training each day at work.”

Outside of work, Joe and Rosa spend a lot of time with their family. Rosa enjoys playing with Joe’s three children and with their six year old golden retriever, Jak. She and Jak go with the family on all their activities and adventures – whether to baseball games, to the beach, or just for a ride in the car. This summer Joe hopes to learn whether Rosa will enjoy swimming in the family pool. A typical lab, she loves to be around people and soak in lots of attention and love.

Joe and Rosa are excited to be a part of the MSA team and look forward to a great career in explosive detection ahead!