It is the holiday season and with nearly 12 billion parcels and letters expected to ship across the country, New York’s JFK international Airport has never been busier. As one of the largest U.S. gateways for international air cargo traffic, volume at this airport remains at peak levels and keeps MSA Security® canine handler Juan Figueroa and his canine partner, Tacoma, extremely busy. This duo has been working together for three years and is one of the hundreds of MSA Explosive Detection Canine (EDC) Teams working at national airports to screen cargo as part of the U.S. Transportation Security Administration’s (TSA) Third-Party Canine (3PK9) Program. 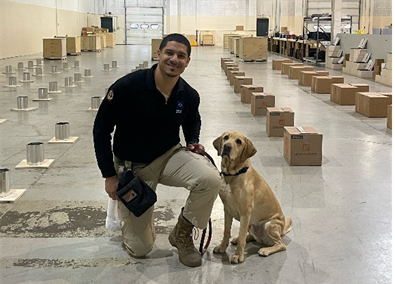 Juan and Tacoma trained at MSA’s flagship training academy in Windsor, CT. Like all MSA’s specially bred and socialized canines, the then-13-month-old yellow Labrador was imprinted on all five families of commercial explosives, as well as homemade explosives. Operational training specific to cargo deployment followed and is consistently validated through testing and certification on nationally recognized NAPWDA standards. “I am so grateful to have a partner as hard-working as Tacoma,” says Juan. “The cargo environment is challenging, especially now during the holiday season with such high volumes. Tacoma has great energy, loves to work and we always get the job done.” And the job is a big one addressed most efficiently and effectively by a properly trained canine. Depending on the day, Juan and Tacoma will screen mail, packages, ULDs or containers. Because canines can move to the cargo and work around it to successfully screen, shippers do not need to break down the configurations. This is a huge time saver. Cargo that once took hours to screen, now is completed in mere minutes.

Prior to joining MSA, Juan served in the U.S. Marine Corps. He enlisted at just 19 years of age and credits the military for giving him the discipline, integrity and tactical tools needed for his role as a canine handler. “It is extremely challenging to assume large and consequential responsibilities at such a young age. We were put in critical situations every day in the field. Many of them required life and death decision making,” explains Juan. “At the same time, my years of service were very rewarding and I made lifelong friends. I am grateful because it shaped who I am today.” 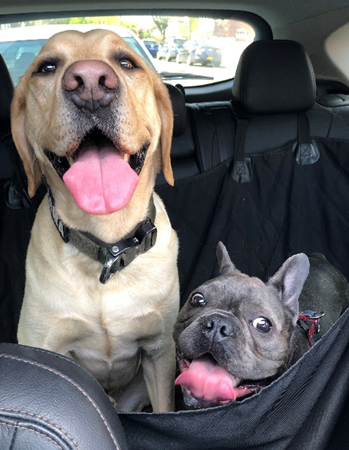 On their days off, Juan and Tacoma never miss an opportunity to get outdoors. Whether it is the park, a hiking trail or the running track, they always take along their furry friend – Juan’s French bulldog, Jeter, who is the same age as Tacoma. And, soon, there will be a new addition who will want to get in on the fun. Juan and his long-time girlfriend are expecting the birth of their first child in February. Wishing them all the best!