Lou and Susie just celebrated their three-year anniversary at MSA Security. The pair are one of MSA’s Emergency Response Explosive Detection Canine (EDC) teams. Based out of MSA’s 9 Murray Street headquarters, they provide immediate sweeps for clients enrolled in our Emergency Response Program. While the duo has served in this role since March, 2017, they were previously based at the Staten Island Ferry terminals where MSA provides around the clock EDC (AKA Bomb Dog) sweeps every day of the year.

Lou, a Staten Island native, has a military background. He spent 10 years in the U.S. Army. In fact, he joined when he was still in high school. Both his grandfather and older brother served in the in the Marines. Lou was inspired to serve as well, but made his own way in the 28th Infantry Division of the Pennsylvania National Guard. He completed 9 weeks of basic training and 5 weeks of infantry school. Thereafter he was quickly deployed to Afghanistan from 2007 – 2008, and later to Kuwait from 2012 – 2013 with MSA Field Supervisor, Andrew Urbaez.

Day to day life in the military for Lou included early wake up calls, lots of physical training (up to 20-mile ruck marches), and a disciplined schedule. While deployed, he experienced working with canines for the first time. Though he was not a handler, and Explosive Ordinance Disposal (EOD) team was attached to his unit at all times. Lou’s experience with the EOD team and his friendship with Andrew meant MSA was a natural next step. 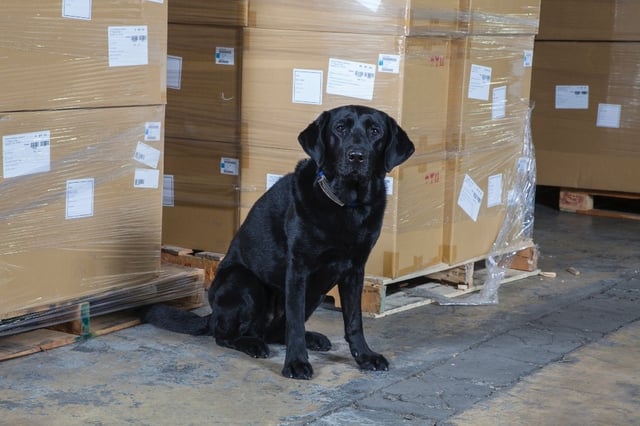 While Lou was completing his service, Susie, a black Labrador Retriever, was diligently learning how to become a bomb dog. She was raised in Puppies Behind Bars, a program that offers inmates with good behavior the opportunity to bond with and socialize working dogs before their formal schooling starts. Puppies behind bars taught Susie to be sociable and obedient. Some graduates go on to become seeing eye dogs, or other types of working dogs. Susie’s strong nose and energy made her well suited to be a bomb dog. She completed 3 months of training at MSA’s academy in Windsor, Connecticut, where she learned how to sniff out the bad stuff. The last two weeks of the academy were spent in joint training with Lou, her new dad. They passed their final exams (The DOJ NORT and NAPWDA) with flying colors.

These days, Lou and Susie have become pretty close. The pair both work and live together. When off duty, Susie is another member of the family. She enjoys going on runs with Lou or just hanging out on the couch. The two have many years ahead in their career. We’re glad they’ll be on the streets of New York, working hard to keep us safe.