Mike and his canine, Hatter, joined MSA’s EDC team in March of this year. Mike possesses both military and law enforcement experience. He enlisted in the Navy upon high school graduation, was stationed at the San Diego Naval Base, and assigned to the USS Bristol County. He performed security and patrol details, was trained as a search and rescue swimmer, and as a heavy equipment operator.

After completing two years of active duty service, he transitioned into law enforcement where he had a distinguished 20 year career with the NYPD. Since childhood, Mike knew he wanted to pursue a career in law enforcement and public service. He worked as a patrol officer for five years in Brooklyn before he was promoted to detective.

Mike spent his last 7 years as detective on the Bronx night watch. With 10 detectives in total, and 4 on duty every night, his unit handled the entire Bronx. They investigated homicides and shootings every night. The job involved a lot of interviewing. Mike says the most challenging, yet most rewarding portion of the job was speaking with the families of victims. Though it was difficult to witness their grief, it was rewarding to meet and work with good people, and to have the ability to help the public.

As with all of our employees, Mike’s military and law enforcement experience served as excellent preparation for his position as an EDC handler with MSA. His experience taught him how to deal with the public in a professional manner, how to understand, anticipate, and respond to people’s attitudes and behaviors, and how to see things from a security point of view. These skills require years of on the job experience to develop, and are invaluable in our field of work. 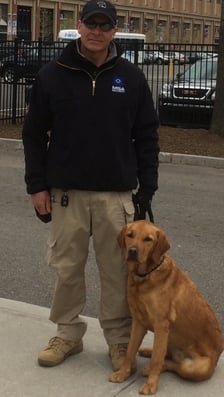 When Mike joined MSA in March of this year, he was paired with EDC, Hatter. Hatter is an energetic and lovable 2 year old golden lab. Hatter came to MSA from Guiding Eyes for the Blind. As he grew, it became clear to Hatter’s raisers and Guiding Eye trainers that his temperament made him far better suited to serve as an explosive detection canine than as a guide dog for the visually impaired. Hatter was redirected to MSA’s training facility in Windsor where he was imprinted on a number of explosive odors and then paired with Mike for operational training. They passed NAPWDA and DOJ NORT certification with flying colors. 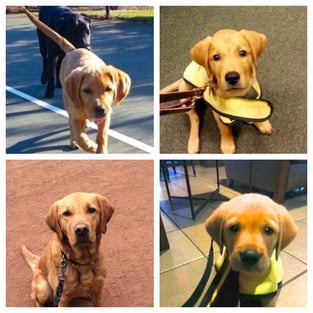 Hatter, as a puppy

Mike has always been a dog lover, and thoroughly enjoys working with Hatter. He has had 6 Labrador Retrievers prior to Hatter, all of whom were hunting dogs. In his spare time, Mike likes to stay active and is an avid runner. He participates in long distance runs of up to 100 miles! During training periods, he runs up to 50 miles per week. Hatter will often join him on shorter runs, but he taps out at 3 miles. Mike enjoys running because it clears his mind. In addition to running he also swims 10-12 miles per week and bikes up to 100 miles per week. 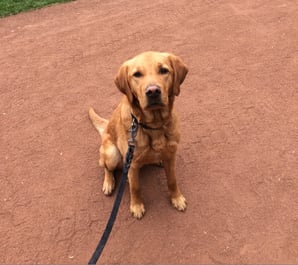 Hatter, on the job!

Mike and Hatter work special events throughout the New York City area, and surely have a great career in detection work ahead of them!
Stay tuned for more to come on MSA’s Explosive Detection Canine Teams over the next several weeks!