When not working, Rob and Diana like to take off for long hikes in upstate New York to keep active and enjoy the beauty of nature. Although when we caught up with the pair, they were in between double shifts at the airport with a heavy assignment schedule ahead of them. So, the getaway will need to wait a little bit longer but Rob says they do not mind at all. They love what they do. He is quick to credit the four-year-old Black Labrador at the end of his leash for making their cargo screening deployment easier. “Diana is awesome. She is always eager to get the day started, which we do with a big breakfast. And because her reward is food, I keep her highly motivated throughout the day with training. She never lets me down in getting through all the cargo we need to screen,” says Rob.

A properly imprinted and trained canine remains the most effective, safest and operationally efficient tool for cargo screening. In this environment, bomb dogs offer key distinctions over traditional screening methods. Their unique ability to sniff out odors in parts-per-trillion and smell in layers allows them to recognize individual explosive ingredients even if masked by other odors. MSA’s canines are imprinted and trained on all five families of explosives, in addition to homemade explosives (HMEs) like TATP and HMTD—always live, pure and never “cocktailed” to ensure recognition accuracy in the field. Modern technology used to screen large quantities of air cargo with the speed necessary to satisfy the worldwide supply chain simply does not exist and may not for quite some time. Yet Diana makes quick work of entire containers, pallets, skids or ULDs. This translates to considerable labor, operational and time efficiencies for MSA clients. 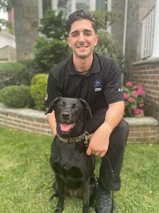 U.S. Veterans Magazine recently recognized MSA Security as a 2021 top company for veterans. Many of their more than 1,300 employees carry military experience. Rob is no exception. Serving in the Army Military Police for six years, Rob was given assignments all over the world, charged with enforcing laws and regulations to protect people and property. His duties also included responding to natural disasters, like Hurricane Maria in Puerto Rico, and emergencies, such as New York City’s Chelsea Bombing in 2017. Thinking back to all his assignments, he says his time in France had a meaningful impact. “The French people were so welcoming and appreciative of our presence. They were extremely grateful for America’s support during World War I and World War II, which was nice to hear more than a century later. While I was there, I visited the Aisne-Marne American Cemetery and Memorial, a World War I cemetery in Belleau. It sits at the foot of the hill where the Battle of Belleau Wood was fought with many American fatalities. It was incredibly grounding,” he recalls.

His National Guard squad leader first encouraged Rob to consider a career with MSA two years ago. Although canine handler was a new role for him at the time, he had a strong desire to make it a career. Rob and Diana trained at MSA’s flagship 73,000-square-foot training facility in Windsor, CT. Following, he earned his TSA certification at the company’s Memphis, TN, training facility. Rob believes his military experience prepared him well for this next professional chapter. “Qualities like discipline, readiness and the ability to think quickly on your feet when under pressure gave me a solid foundation to enter this high-consequence security environment.” Rob is eager to continue his career as a canine handler with Diana by his side every step of the way.