Serena Trueman was born and raised in Hawaii. As a child who played several sports, her family was always on the go. Although that busy lifestyle did not allow for a pet, Serena loved animals. She made herself a promise that one day, when she grew up and lived on her own, she would have a dog. Today, Serena has three: Micro, a 13-year-old Chihuahua; Meilani, a three-year-old German Shepherd; and Gingee, a seven-year-old yellow Labrador who works at Serena’s side five days a week. 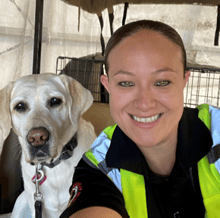 MSA Security® canine handler Serena and her canine partner, Gingee, are one of the hundreds of MSA Explosive Detection Canine (EDC) Teams working nationwide screening cargo as part of the U.S. Transportation Security Administration’s (TSA) Third-Party Canine (3PK9) Program. Deployed in Oakland, CA, Serena and Gingee screen mail, as well as heavy cargo for a major international freight forwarder. They have been a pair for five years, first working explosive detection assignments at stadiums and entertainment venues on the west coast before certifying for air cargo deployment in 2018. “The days are busy, especially during the recent holiday peak season. We screen an enormous amount of cargo each day,” explains Serena who credits her partner with a level of unmatched productivity and efficiency.

MSA carefully vets and selects bomb dogs like Gingee for their keen sense of smell, drive, intelligence and stable temperament. These best-in-class canines are imprinted and trained at the company’s flagship 75,000-square-foot training facility in Windsor, CT. Thereafter, MSA canines are regularly trained and tested on live explosives at one of MSA’s many ATF-licensed training centers throughout the country. Ongoing exposure to live explosive odors and daily training from their dedicated handler keeps MSA dogs at the top of their game.

Serena has also proven to be a leader, recently earning the Lead Handler title. Her increased responsibilities include daily management of seven handlers, ensuring full compliance and documentation of strict TSA protocols and regulations, as well as serving as client liaison. In recent months, Serena and Gingee were selected by MSA leadership to deliver numerous explosive detection canine demonstrations to local county sheriffs and FBI bomb units, as well as various federal government and private sector clients.

All MSA EDC handlers carry military or law enforcement backgrounds. Serena joined the Air Force in 2005. Stationed in Minot, MD, she served as an Airman First Class in the nuclear weapons field for special security forces, consistently earning high marks for physical fitness, preparedness and dedication. She is thankful for her time in the miliary, which she says equipped her well for a career in high-consequence threat protection. “My Air Force training provided me with many of the tools I rely on today as a handler, like discipline, readiness and adaptability. I am enormously grateful for that experience and believe it led me to this career that I love,” says Serena. 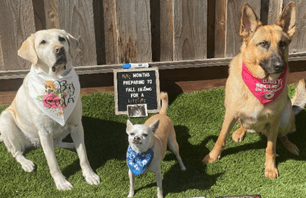 When she is not working, Serena and her wife, Ahniessa, enjoy the downtime with their newborn baby, HonorValora, and their dogs. “When the weekends come, it is really Gingee who gets all the attention from her sisters. They just love spending time together,” says Serena when asked about the trio. “They have the best time running around in our backyard playground and cooling off with dips in the pool.”