They say that good things come in small packages – and MSA Security’s Explosive Detection Canine Handler Skye Pieffer could not agree more. His canine partner, Nyx, is a 40-pound, three-year-old chocolate Labrador who may look tiny but carries the energy and might of a giant. “Her stature is very deceiving,” explains Skye. “People who meet her for the first time think she is still a puppy. Then they see her go to work and quickly learn she is a little dynamo who can outwork the best of them.”

Skye and Nyx first became partners in April of this year. Following comprehensive explosive detection training at MSA’s 73,000-square-foot flagship training facility in Windsor, Connecticut, they went on to complete operational training in Norwalk, California, before returning to Honolulu, Hawaii, for work. MSA has a total of seven regional ATF-licensed

training centers throughout the country, allowing for the continuing education, training and testing of MSA’s more than 650 EDC teams. All teams are trained and tested on live explosives as often as once per month, a critical distinction to keeping MSA dogs best-in-class. Teams are also required to pass annual independent testing according to the National Police Word Dog Association (NAPWDA) and Department of Justice National Odor Recognition Test (DOJ NORT) standards.

Skye and Nyx wake early each morning to the bright blue skies and palm trees of Honolulu. After a quick walk and power breakfast, they head out to an international cargo and mail sorting facility ready to screen items before they are loaded onto airplanes. It is a demanding job, but one that they love. Properly trained canines provide an effective and efficient screening alternative to even the most advanced technology, which can be cumbersome in terms of size, labor, and expense. “In a dynamic and fast-moving screening environment like this, Nyx and I have the ability to adapt to the existing sort processes rather than requiring operational changes to accommodate screening,” explains Skye. “Screening gets done quickly and with very little disruption.”

Skye credits his military background for preparing him with the discipline and determination needed for this high-consequence role. Inspired by his older brother who was a canine handler in the U.S. Marine Corps, Skye entered boot camp shortly after graduating high school. Serving as a U.S. Marine Corps machine gunner, he was responsible for the deployment, care, mounting and unmounting of heavy machine guns. During his four years of service, he was stationed in several countries, including Philippines, Thailand, Korea and Australia.

Although he always missed his family, he quickly discovered the strength of and appreciation for his new family – those he served alongside. “America has the strongest, most incredible military on the planet and it was a privilege to serve my country,” says Skye. “I was honored to share our knowledge and experience with military counterparts from other countries. We provided them with important tools so that they too could succeed in protecting their people. The ability to do that made a tremendous impact on me.” 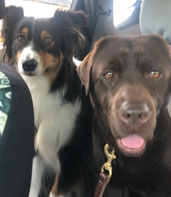 While work keeps Skye and Nyx very busy, living in Honolulu has its clear rewards and Nyx insists they take advantage of them whenever possible. She loves to unwind from a hard day with a refreshing swim, but before planting paws in the sand of any of the world-famous beaches, they must first swing home to pick up their other best buddy, Skye’s Australian Shepherd, Henry, who hates to miss out on any of the fun. Interesting fact: Nyx and Henry share the exact same October birthday.