MSA was excited to participate in last week’s 25th Security Conference and Expo for the ASIS NYC Chapter at the Javits Center. As expected, representatives from our Explosive Detection Canine (EDC) program, handler Tim Dinan and EDC Parnell, were the stars of the show.

Tim and Parnell are based in Atlanta, and travel throughout the United States for a few days or weeks at a time to provide detection services for a range of special events. Tim was a bomb technician with the NYPD for over 15 years, and he brings his extensive explosive detection experience into his position as a handler with MSA. His EDC, Parnell, is a 6 year old yellow lab, and one of the friendliest of our fleet of over 230. Parnell is a graduate of Puppies Behind Bars and MSA’s proprietary training program. Parnell and Tim received NAPWDA and DOJ NORT certification.

Parnell was so excited to represent MSA at ASIS NYC that he greeted and shook hands with all of our visitors! Parnell is a food reward dog. He is rewarded when he locates an explosive odor while conducting a sweep, in sustainment training, or when he shakes hands with new friends.

After greeting everyone at the MSA booth, Tim and Parnell demonstrated an EDC sweep using inert explosive substances. Below, Tim guides Parnell through a search of boxes and luggage. Somewhere in the set-up is a hidden substance with an odor that Parnell is trained to detect. Tim does not know where this odor was placed. 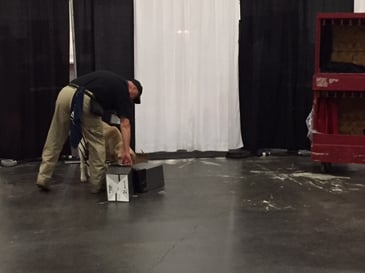 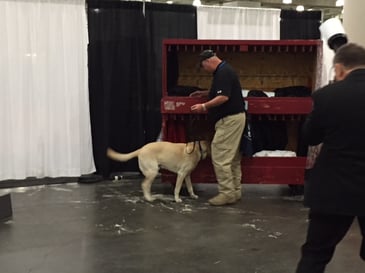 Like all of our EDCs, Parnell is trained to give a passive indication by sitting and looking at his handler when he detects an explosive odor.

Parnell sat in front of the blue bag where the substance was hidden! Below, Mike Wynn, Director of Canine Training and EDC Team Certification, displays the hidden substance and answers questions about our EDC program. 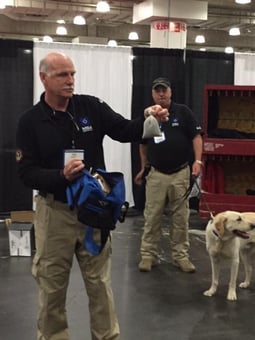 Tim and Parnell had a great time at ASIS NYC. For those who are hoping to see and learn more about our EDC Program, MSA will have a team at the ASIS International show in Anaheim, CA this coming September.

Check out our YouTube Channel for Parnell's EDC Sweep Demonstration!