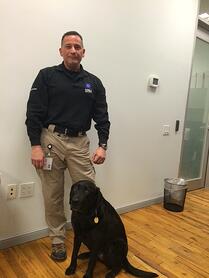 Vinnie and Cindy are one of MSA’s star Explosive Detection Canine (EDC) teams! Vinnie is a Field Supervisor in the New York City area, along with Joe Nacarlo. Every day, he and Cindy, his EDC partner of the past 3 years, visit different sites throughout the city where MSA’s EDC teams are deployed. Vinnie checks in with clients and handlers to ensure that the EDC program is running smoothly. Cindy makes use of her extensive training and experience to help her fellow canines inspect for explosive devices at different sites.

Vinnie has worked with MSA for nearly 10 years. He was hired as an EDC handler, and worked at the Federal Courts and the Staten Island Ferry prior to his promotion to Field Supervisor in December of 2014. His first canine partner was also a Black Labrador Retriever named Cordy. The two worked together for 7 years before Cordy retired. Cordy now spends her time relaxing at home, and enjoys swimming. Since Cordy’s retirement, Vinnie has worked with Cindy, a loveable 7 year old English Black Labrador Retriever.

Cindy is a graduate of the Puppies Behind Bars program and MSA’s proprietary EDC training program. She completed her original training with another handler. She and Vinnie had met while on the job, and when Cindy’s original handler retired from MSA, and Cordy reached retirement age as well, Vinnie requested to be paired with Cindy. Vinnie and Cindy completed training at MSA’s facility as a team and obtained North American Police Work Dog Association (NAPWDA) and the Department of Justice National Odor Recognition Test (DOJ NORT) certification.

Prior to his arrival at MSA, Vinnie served as a distinguished member of the NYPD. He served as a Patrol Officer for the first 3 ½ years of his service, and then entered the elite Emergency Service Unit (ESU). ESU Officers are tasked with a wide range of extremely challenging missions which they must learn to complete quickly and with minimal guidance. During his career, Vinnie completed dive rescue missions, managed HAZMAT situations, handled hostage negotiations, worked with the bomb squad, and more. Many of MSA’s employees emanate from ESU, as this experience prepares them for the high consequence protection that MSA provides. Vinnie credits the ESU with teaching him effective teamwork skills and providing him with an independent, can-do mentality. 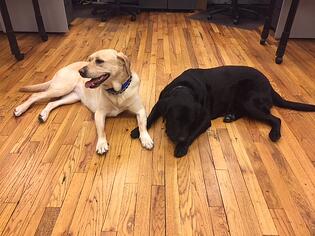 In his free time, Vinnie serves as Captain of the volunteer firefighter unit in his home town. While it is a big commitment, he enjoys every minute and finds the experience extremely rewarding. He also enjoys lots of outdoor activities such as hunting and fishing, and is a Harley enthusiast. Of course, he spends plenty of his free time with Cindy and Cordy at home. The two especially enjoy swimming in the family pool. Cindy will continue to work for a few more years, after which time she will retire and spend the rest of her days.