MSA would like to thank Wyl-e Coyote, or just Wyl-e for short, for his 8 years of outstanding work!

On December 9, 2005, Calder, an American Chocolate Lab, later to be named Wyl-e Coyote was born in Poughkeepsie New York at the Sunny Knoll Kennels. At 8 weeks old Wyl-e received an anonymous sponsor to become a working dog, he was sent to live in a prison in New York to learn basic obedience. At 18 months Wyl-e started his training as an Explosive Detection Canine for MSA, and in about 4 months he graduated as a play reward canine and went off to his first handler.

Wyl-e and his first handler were not a perfect match, and Wyl-e was sent back to learn more from MSA’s canine training staff. The training staff at Windsor re-evaluated Wyl-e and found he was better suited as a food reward canine, as he liked to eat more than play. This is when Wyl-e met his new handler, K. Wyl-e and K instantly hit it off and moved from New York to Massachusetts to live with K and his retired MSA EDC, Boomer and they were instant friends. Wyl-e went to work at the IRS in Andover, Massachusetts searching all the mail and unattended bags.

After several years K, Wyl-e, and Boomer moved to New Hampshire, where Wyl-e had 2.5 acres of fenced in yard to run and play with Boomer, he even had his own room in the house! During this time Wyl-e worked at a lot of different places and traveled all over the US. He went to Chicago for the NATO Summit, North Carolina for the Democrat Convention, Times Square in New York, and both convention centers in Boston, the Boston Convention and Exhibition Center (BCEC) and Hynes Convention Center, where he made A LOT of friends.

In 2010 Wyl-e had a change of scenery, he was deployed overseas with handler K, where he did 3- four month tours in all different areas. K says “for Wyl-e being overseas was like being in the Super Bowl of the dog world.” Wyl-e had several great finds that saved many lives, and seemed to really be thriving. He even had a toe amputated from an infection that never slowed him down! 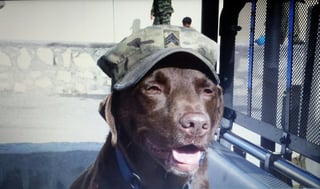 When they returned from overseas Wyl-e went right back to work in Boston, putting in a lot of hours at the BCEC and Hynes Center. Wyl-e naturally bonded with everyone in Boston and was loved by many, the convention center employees quickly became like another family to Wyl-e.

On August 23, 2015, after working 3 – 12 hour days and the Pokémon convention, he retired that night. He is now 10 years old and loves to stay at home with K’s other retired bomb dog, Lizzy, they shared the couch and spend their days watching animal planet. K isn’t done training EDCs yet, he can be spotted at the convention centers in Boston walking around with Patrick or “Patty O” teaching him to fill the big shoes that Wyl-e left for him.

Today, September 15, 2015 Wyl-e will be honored at the BCEC by his second family as a thank you for all the work, time and love he put into his job. He was/is a truly outstanding dog and friend!

Waiting for the next package