Like all work or service dogs, MSA’s Explosive Detection Canines (EDC) undergo extensive training to be able to perform the work they do. Before entering MSA’s proprietary explosive detection training program, canines must receive initial socialization and obedience training. Periodically, canines who received training in a different line of work will be redirected to explosive detection based on their temperament and skills.
This week and next week, we want to share with you the story of two puppies, Gilda and Tammy, who were on the path to becoming guide dogs before making their career change to explosive detection. These two canines were bred and raised through Guiding Eyes for The Blind, based in Yorktown Heights, NY. They were paired with puppy raisers Beth and Colleen, the individuals responsible for teaching them basic commands and socializing them in a variety of different environments.
Recently, puppy raisers Beth and Colleen stopped by our EDC training facility in Windsor, Connecticut, to visit Gilda and Tammy and share their experiences. This week, we have a few words from Beth.
Beth and Gilda
At 4 months of age Gilda came to live with me. I had previously raised another dog named Glimmer. The day after Glimmer left for harness training I received Gilda. She had big paws to fill. At the time, I was a college senior at the University of Delaware. Gilda benefited from the wide variety of activities in my life as a college student. She learned to be comfortable in crowds of students, to ride on busses, to settle during lectures and to behave in restaurants. Gilda even accompanied me to my graduation ceremony when the time came. 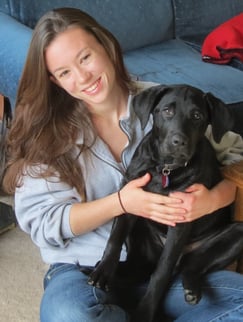 Beth and Gilda in 2012
Once I graduated she continued with me on my adventures. I moved back home for the summer and Gilda attended pre-guide dog classes in Manhattan. When August rolled around we moved to Massachusetts so that I could start my doctorate in veterinary medicine. Gilda was constantly by my side.  As much as I helped her, she was now helping me with my transition into a new environment. It was much easier to make friends in vet school when I had a friendly dog at my side. 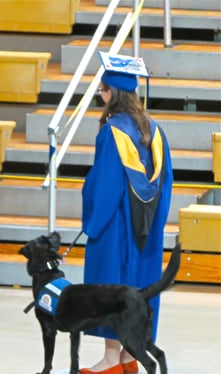 Beth and Gilda at Beth’s Graduation
In December 2013 she left me for the next phase of her journey: harness training. Harness training typically lasts approximately 6 months. This is where Gilda would learn the detailed, complex work required to lead an individual who is blind or visually impaired. I received training reports once a month.
Gilda started out strong in harness training. She was very food motivated and eager to please. However, as the training progressed and the environment became more difficult, Gilda began to falter. Four months into harness training she was released from guide dog training. Although she was willing to work, Gilda got distracted by oddities in her environment and needed support from her handler to get back on track.
When a dog is released from guide dog training he or she is offered up for an alternative career. Fortunately, the very traits that make canines unsuitable as guide dogs make them highly effective in explosive detection. Gilda, frequently distracted, is quick to scan her environment for new scents. She was thus chosen to start training with MSA security at the company’s facility in Windsor, CT. After two months of training, she was placed with a handler to begin official detection work. She is now working in Manhattan, and has a permanent home with her handler and family. I was able to see her work at the MSA training facility. 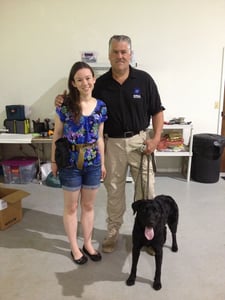 Beth with Gilda and her new handler Frank at MSA’s EDC raining facility
Guiding Eyes has a saying that a dog chooses its career. Although Gilda was not suited to be a guide dog, she is an enthusiastic, happy, and successful explosive detection dog. I raised Glimmer before Gilda and continue working with a new dog, Rosa, now, but Gilda’s enthusiasm will always hold a special place in my heart.