National Amusements Inc. which owns 31 theaters in Massachusetts, Connecticut, New Jersey, Rhode Island and Ohio has implemented additional security measures in response to the movie theater attack in Antioch, Tennessee on Wednesday, August 5th. In this attack, a 29 year old reportedly paranoid schizophrenic man, named Vincente Montano walked into a movie theater with two backpacks containing a variety of weapons. Included in his arsenal were two cans of pepper spray, a hatchet, a pellet gun, lighter fluid and a propane tank. Montano was shot dead by a police SWAT team to conclude the incident; but, not before he was able to release pepper spray and use his hatchet to injure a movie goer.

Unfortunately, in the United States, attacks on movie theaters are becoming an increasingly identifiable trend. Recently, in Lafayette Louisiana, at a 7:10 viewing of “Train Wreck” in the Grand 16 movie theater John Russell Houser (59) opened fire with a .40 caliber handgun. Houser killed two people and injured 9 others in the incident before taking his own life.  We can all remember July 20th, 2012 in Aurora, Colorado when James Eagan Holmes Opens in a new window enter the midnight screening of Dark Knight Rises at Century 16 movie theater setting off tear gas and opening fire with multiple weapons. In the incident, 12 people were killed and 70 others were injured making this the mass shooting the largest in US history, to date. Holmes, who was not slain during the incident, was recently given multiple life sentences without the possibility of parole after being found guilty of 24 counts of first degree murder, 140 counts of attempted first degree murder and one count of possessing illegal explosives.

These incidents have put the entertainment industry on notice. Security professionals have noted for years that places of mass gathering are susceptible to attack and are often targets that are “soft” in nature. The steps that National Amusements Inc. is taking include the implementation of baggage restrictions and a policy that allows employees to search patrons on the way into the theater. Credit should be given to National Amusements, Inc. for stepping up ahead of other theater companies and doing something to help protect patrons. In the hospitality and entertainment industries, where ease of access and patrons enjoying their experience are critical to the survival of the business, security upgrades that highlight risks with attending mass gatherings are a big step. Particularly so, for the first company to implement new measures. That stated, these new measures are limited in their effectiveness, particularly against an armed adversary.

The key to mitigating the active shooter threat is to identify the adversary and interdict them in above ground planning stages including surveillance of the targeted facility. Personnel throughout the property should be trained in the detection of surveillance activities and a method for responding to suspected surveillance should be developed. The response to surveillance may include challenging of the individual by appropriately equipped security and/or law enforcement personnel. The idea here is to make the adversary think that their chances of successfully attacking the property are limited. The application of random anti-terrorism measures (RAM) including the deployment surveillance detection specialists, armed personnel, allowing off duty law enforcement (with appropriate credentials) to carry in your theaters, and paid law enforcement details can be extremely effective in countering this threat. Active shooters are, like electricity, always looking for the path of least resistance. The more potential resistance they feel there will be, the less likely they are to select a path that leads to your next screening. 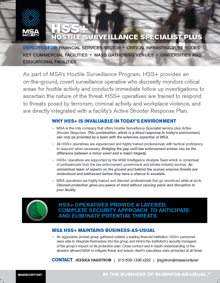 Opens in a new windowMSA Security has developed our HSS+ Program to serve as part of our clients’ layered approach to the Active Shooter threat. This program places some of our most highly trained operatives in covert roles that allow them to conduct counter surveillance operations for our clients throughout the United States. A study of active shooter incidents throughout the US has determined that these incidents, most often, end when armed officers arrive and /or engage with the active shooter. This same study noted that the number of casualties is directly commensurate with the duration of the attack. The HSS+ program is designed to bring an armed response to bear on the attacker rapidly, ultimately shortening the attack time. Our Hostile Surveillance Specialists are trained in firearms, shooting on CGI assisted ranges that simulate your facility, and on a variety of other key areas including first aid, surveillance detection, and surveillance incident reporting. Our surveillance incident reporting sends key information from all of our clients to our headquarters for detailed analysis and pattern identification by trained analysts to determine potential surveillance activity by facility type and region. This knowledge allows our HSS+ Director to provide metrics based recommendations for where and when to flex operative coverage. For more about how HSS+ can help places of mass gathering including movie theaters, click here Opens in a new window.