SUNY Cobleskill (State University of New York College of Agriculture and Technology) has internship programs available for many areas of study. For Shaina Rion, an Animal Science student with a concentration in Canine Training and Management, an internship involving canine training with MSA Security sounded like it would be the perfect fit.

With the help of her professor and mentor, Dr. Stephen Mackenzie, an internship between SUNY Cobleskill and MSA Security was proposed and approved. Rion started with MSA in the summer of 2018 for which she would receive credits toward her bachelor’s degree.

Specifics of the internship and what it would entail were outlined and presented to Rion and Dr. Mackenzie. From May 14th to August 24th, Rion was expected to assist in the transportation of dogs from the kennel to both the training facility and vet appointments. She was also expected to shadow other MSA EDC teams working UCONN basketball games, as well as update documents and spreadsheets within the training facility and kennel.  Finally, she was asked to observe trainers in the facility and work a number of dogs on her own (both labs and shepherds).

This eventually turned into a full time position for Shaina after graduating from SUNY in December 2018. She was offered the position of Explosive Detection Canine Bridge Trainer with MSA, which she excitedly accepted. She is responsible for “bridging” all incoming dogs from imprinting and getting them to the level they need to be at in order to be placed in class. This includes working with the dogs to perform longer searches and improve the accuracy of their hits on targets. During her almost year of full time employment with MSA, 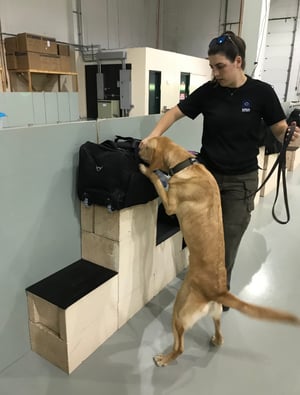 she has successfully bridged over 100 canines.

Prior to the start at MSA, Shaina’s career goals were to train working canines for police, the military and private sectors. She believes the internship between SUNY and MSA provided her with extensive knowledge and experience which helped make her career goals a reality. Shaina is the first student from SUNY within her major that received an internship opportunity with MSA. She was excited to bridge the relationship between SUNY and MSA and hopes that her experience will create more opportunities for possible future internships.

In order to maintain proficiency in training, Shaina has been paired with EDC Bernadette since accepting the position. Bernadette is a golden lab mix who just turned 3 this past May. She is a food reward dog, but she cannot get enough of tennis balls. “She’s the best, she’s just so good. She lives to work, she’s also obsessed with tennis balls” said Rion. “Bernie will run into the woods by my house and come back with a random tennis ball!” In addition to tennis balls, Bernie also loves hiking and swimming with Rion’s own dog, Milo, and her cat, Meda. She says the trio are best friends. 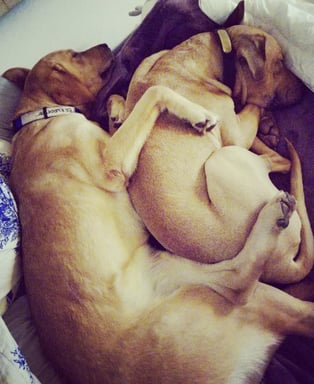