Current unrest across the country underscores the critical importance of a robust perimeter protection program to prevent the introduction of dangerous goods to your facility. Vulnerable areas, such as entrances and mailrooms, must be secured with effective X-ray screening.

A blue pipe capped at both ends was enough to alert screeners that the item was certainly suspicious. A closer look determined that there existed no fusing or explosives. 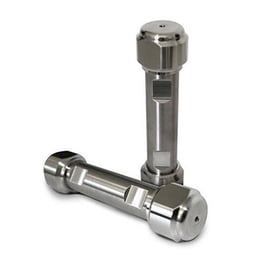 SmartTech® personnel have seen numerous items such as these that are actually chromatography HLPC columns. The device is used in analytical chemistry to separate, identify, and quantify each component in a mixture. 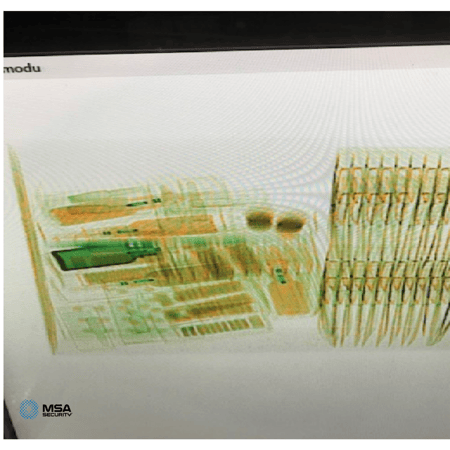 This item on an international cargo shipment was deemed suspicious due to apparent initiators placed inside liquid filled bottles. An investigation of the manifest identified medical items. 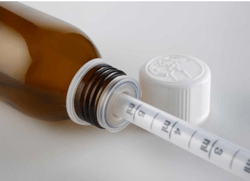 MSA Bomb Technicians and the on-site screener determined the items were in fact a drug industry packaging item. What appeared to be initiators were in fact syringes placed in the bottle for accurate dosing. 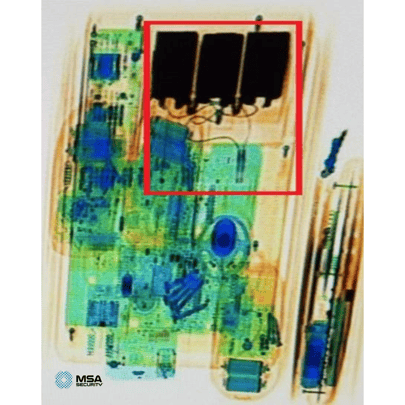 Initial analysis of this image showed an apparent viable blasting cap wired to a power source. As part of standard good screening practice, the item was repositioned in the X-ray machine and scanned again. Examination of the new image revealed the apparent blasting cap was actually innocuous parallel wires. This, along with the lack of other PIES components, led the package to be cleared. 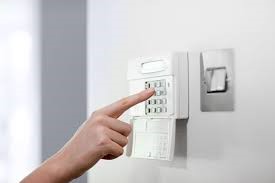 Research later determined this item was a home security system. This incident is a great reminder of the importance of viewing multiple X-ray images and angles to reach a correct interpretation and clearance decision.

As always, MSA Bomb Technicians analyzed this image by looking for “PIES”: a Power source, an Initiator an Explosive substance, and a Switch. A trained eye can see that the dark dense blue objects are capable of being a power source, whether it’s a pair of 9-volt batteries or some sort of capacitor. Those are common in many different items. The switch, which is the hardest of the four indicators to interpret, could be a wire loop or a much more sophisticated electronic component. That leaves us with the explosive and initiator to identify. Since there is an absence of any pipe like container, the explosive would show up as organic in orange; the density would be much greater and the color deeper than what is depicted in the X-Ray. The initiator would also have greater density. 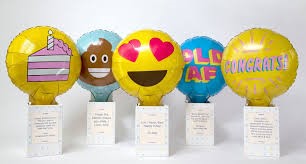 Without an explosive and initiator, PIES doesn’t exist and the package is eligible for clearance. Concurrent investigation of the package manifest and packaging confirms this conclusion in that the box contains a… Cardalloon! Part card, part balloon, and entirely non-explosive. 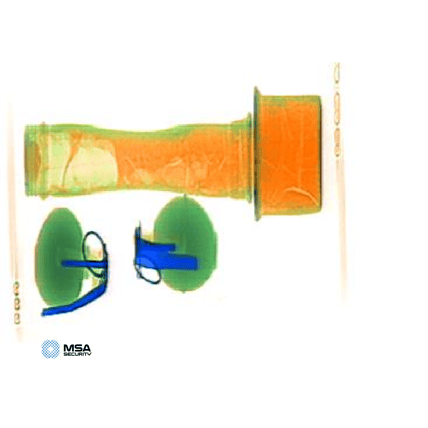 This image, identified in a cargo shipment, appears to depict 3 grenades. The top elongated ordnance was consistent with an M-24 WW11 German stick grenade. However, this grenade, which has been obsolete for decades, typically contains metal fusing mechanism components. The image depicts only organic and light density material with no necessary metal components and metal casing, which should be indicated in blue. The lack of discernable fusing and an inconsistent color (atomic number) connotation would determine that this device is inert.

The bottom two devices resemble M67 “baseball grenades”. Actual M67 fragmentation grenades would have a metal casing and be of such density that their atomic number would depict as blue to black. The green color of this” baseball casing” would be consistent with glass, ceramics or aluminum. This would determine the device to be inert. The grenade spoon and blasting cap are in fact the genuine blue color but they are inconsistent with a genuine fusing mechanism due to a lack of a proper spring assembly.   Both devices were deemed to be inert replicas. 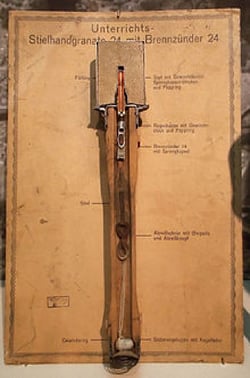 A manifest investigation was requested and it was determined that the shipment originated from a Trading Company. The contents were list as a “potato masher” and replica grenade. “Potato Masher” was the common nickname given to German WW11 grenades of the type.

This image of a cargo shipment from a toy company to a development company appears to show all the elements of an explosive identified in the PIES acronym. MSA Bomb Technicians investigated the cargo manifest information. Contents included a prototype toy made up of electronics, water, polymers, glitter, and glue. This is consistent with the atomic number color depictions in the image. For example, a water polymer mixture would appear the same as an organic high explosive.

Furthermore, the story line that the manifest told was consistent with a toy manufacturer sending a prototype to a developer. This intelligence, coupled with a lack of an apparent fusing circuit and the irregularities in the possible switch and initiators, led MSA personnel to clear the package.

This image contained all the elements of an improvised explosive device. The on-site screener contacted MSA’s Emergency Operations Center, and followed proper procedure repositioning the item in the X-ray for a different view. The second image showed the item no longer appeared to be malicious. When screening any item that appears suspicious, it is imperative that the item is repositioned in the machine to gain a different perspective.

Further investigation revealed that this item was a lightning strike counter.

What do you see here? Two drills, you say? Correct! But there is a third item hidden in not-so-plain sight. 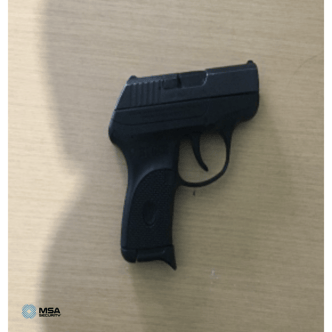 The right drill also conceals a Ruger .380 semi-automatic. That’s right, there is a weapon taped to the drill. Upon comparison of the two drills, this can be identified but it’s not so easy when you view just the right side drill alone. 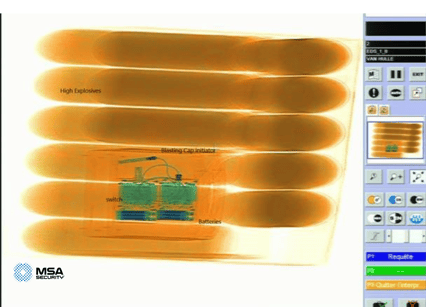 Based on the X-ray image alone, a clearance call is difficult here. The components are consistent with an actual Improvised Explosive Device – there is a power source, initiator, explosive, and switch (PIES). MSA Bomb Techs obtained information from a manifest and compared it to the component depiction and atomic number consistency. This was instrumental in determining the final outcome. This image was determined to be an innocuous, demagnetizing meter, packed in a highly organic material. A Non-Detect was subsequently given and the image was stored in an identification library. It is important to note that the process for suspicious package clearance involves the totality of the circumstances. 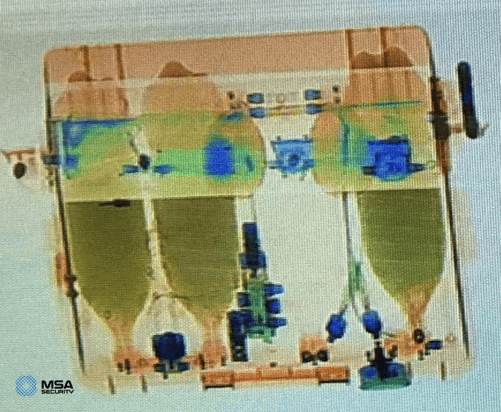 In December, the below X-ray image in Australia was deemed suspicious by on-site screeners. It appeared to be military ordnance connected to a circuit. Although the shapes are similar to mortar rounds, the images in the X-Ray are missing any mortar fins. Most importantly though, is the fact that the color depicted in the dual energy X-Ray scan is green. The color indicates that the items are most likely made of a light material such as glass, ceramics or maybe plastic. All ordnance would be made of metal and definitely be of the bluish to black density color scale.

An investigation revealed that the suspicious item in question was a brand new medical technology developed to treat COVID-19 patients, a SentOx Oxygen Concentrator, pictured above.