The annual Macy’s Thanksgiving Day Parade, a tradition since 1924, is scheduled to take place this Thursday, November 26th, in New York City. On the eve of the parade, the traditional public inflation of the floats will take place from 3pm – 10pm. “Inflation Eve” is an event in itself, attracting upwards of 50,000 people. The parade, beginning at 9am the following morning, runs a total of 2.65 miles and attracts about 3.5 million spectators every year. 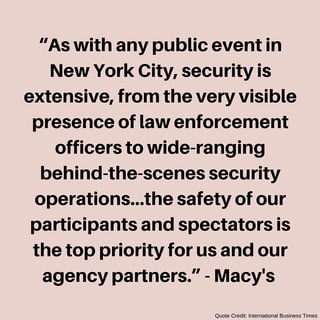 Given the recent terrorist activity in Paris, Beirut, and Lebanon, the gathering of such an enormous crowd at a high profile, televised event sparks concern among many NYC residents and visitors. However, the NYPD Shield Association released an informational bulletin on Monday which stated there was no specific threat information indicating plans to attack the event. Furthermore, NYPD Police Commissioner Bill Bratton says he has “no concerns about security”. The certainty of his statement is amplified by the fact that he plans to attend the event himself, alongside his two young grandchildren.

Still, precautions are being taken and security at the parade will be ramped up this year. Standard measures that have been taken in the past will still be in place, including radiation detectors, police helicopters, and undercover officers, according to former NYPD Commissioner Ray Kelly. While the total number of officers scheduled to be present and working during the parade will not be released, it has been reported that there will be an additional 1,300 officers on duty this year, assigned specifically to counterterrorism. There will also be an additional 100 new critical response command officers. Past security measures that may be seen again include bomb sniffing dogs and Sky Watch, a portable two-story tower that gives officers an aerial view of the crowds.

Representatives from Macy’s have not expressed any concern or reluctance in moving forward with the parade. They have reported that they are working closely with the city, and its agencies to ensure the safest possible experience; “whatever they say goes”, said Amy Cule, Macy’s Executive Producer of the parade.