The threat from extremists who attempt to use improvised explosive devices (IEDs) to cause harm is persistent and pervasive. High-profile international incidents frequently make the headlines, yet explosive occurrences are rising sharply here in the U.S. as well. According to Justice Department statistics, there were 428 incidents in 2020, up 71% from the year before. The threat to Americans will likely remain high over the coming decade as instructions and materials for IEDs are readily available online. For example, the truck bomb used in the 1995 Oklahoma City bombing cost $4,500 and took less than one day to build. That attack killed 168 people, wounded 700 more and resulted in over $650 million in damages.Even small, unsophisticated devices can succeed in creating fear and jeopardizing lives. The December 2020 Christmas Day vehicle-borne improvised explosive device (VBIED) bombing in Nashville, TN, is a flashpoint in this regard. A single disturbed individual was able to build, test and detonate a bomb using everyday materials purchased from retail stores, going undetected by authorities. Fortunately, attacks like this are often thwarted by law enforcement throughout the country. As an example, earlier this year, a Florida man with homemade explosives devices was arrested near a Tampa Bay area rally and charged with making and possessing a destructive device. The accelerated pace of IED incidents serves as a harsh reminder of the value of deterrence and detection.

Explosive Detection Canines (EDCs) are the most effective and efficient tool to address the threat of IEDs. Sports and entertainment venues, public transit hubs, cargo facilities, landmarks and commercial buildings are all high-profile targets of today’s terrorists. The more than 800 MSA Security® EDCs are imprinted on all five families of commercial explosives, as well as homemade explosives (HMEs) like TATP and HMTD – always live and never “cocktailed” to maximize olfactory recognition in the field. Canines are then operationally trained according to their intended deployment. Training is consistently validated through independent testing and certification on nationally recognized NAPWDA standards. An MSA bomb dogs’ unique ability to sniff out odors in parts-per-trillion and smell in layers allows them to recognize individual explosive ingredients even if masked by other odors. This makes them the right choice for combatting the threat of vehicle-borne or person-borne IEDs.

While widely used throughout the country, traditional metal detectors and X-ray screening solutions alone are no match for the innovative tactics of hostile actors. Misinterpretation of suspicious items is a liability risk that may lead to unnecessary evacuations or, even worse, the mishandling of a true IED threat. To maximize screening effectiveness, highly trained and skilled eyes are required. Only experienced bomb technicians can identify the ever-evolving nuances in a potential explosive device as captured by X-ray images. Real-time and Instant access to experienced eyes is delivered at scale through MSA’s Emergency Operations Center and its patented SmartTech® technology. More than 1,000 SmartTech units are utilized across 41 states and 53 countries at high-volume facilities and businesses. These organizations know that an unnecessary evacuation of just a few hours can result in millions of dollars lost and gravely harm their reputation. SmartTech® minimizes the possibility of such disruptions. 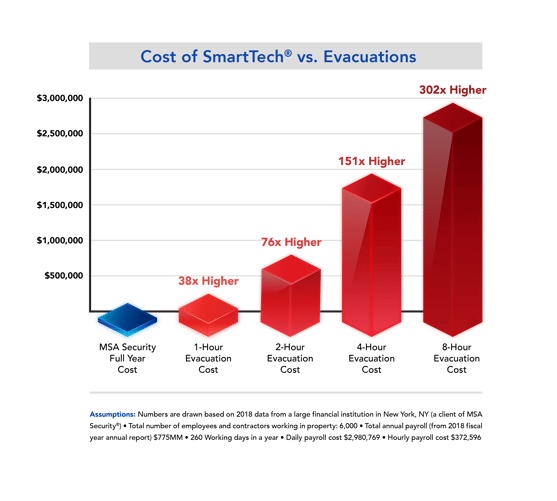 Did you know: A full-year subscription to SmartTech® costs less than 1% of the cost of a four-hour evacuation.

These are just two of the proactive approaches that organizations from every industry must consider in order to enhance security and resilience. Protecting people, property and brand reputation are priorities well worth the investment and far less costly than recovering from the damage resulting from a genuine or mishandled IED threat. To learn more, contact us today.