With just 3 days left, Houston, Texas is gearing up to host its 3rd Super Bowl. While there is no credible threat, officials have been working non-stop to secure almost three miles of security perimeter around the venue.

Reuters reports, “metal detectors, bomb-sniffing dogs and myriad other security equipment have been deployed across downtown Houston and 7 miles (11 km) southwest at NRG Stadium, which will host the football game and about 73,000 spectators.” 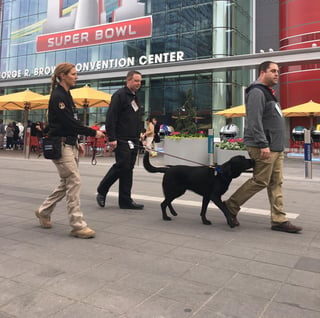 Unlike last year’s Super Bowl in San Francisco, there will be a greater uniform presence and instead of multiple venues dedicated to the event, there will only be two. Hotels in the area have also begun to enhance their security with active-shooter drills and routine sweeps. The game has been given a Special Event Assessment Rating (SEAR) 1 rating, the same as previous years due to the huge attendance and media presence anticipated.

Local law enforcement is working with around 20 agencies, including the FBI and DHS to ensure every possible threat situation could be properly handled. Due to the horrific attacks that occurred over the past year including in Nice, France and Berlin, Germany, security officials have deployed massive concrete jersey barriers to deter vehicle borne incidents. Every vehicle and driver that are headed to the stadium must pass inspection and a full X-ray scan by the US Customs and Border Protection. Upon clearance all vehicles are then escorted to a secure area at the stadium.

Along with the vehicle inspection, new cameras have been installed throughout the event space. The technology in these cameras is far superior to your regular everyday security cameras. They can zoom in up to 30 times in high definition, even in low lighting. In addition to the high definition, they have smart sensors that can analyze voices to the point of detecting aggression. But it doesn’t stop there; the cameras can let you know how long someone was stationary and the moment they leave behind something like a bag. These scenarios then alert the authorities to check out the situation.

Much like any sporting event, drone use is strictly prohibited. There will be a 10 mile (30 for drones) no-fly zone on Sunday night above NRG at 18,000 feet high. This ban will begin at 4:00pm Sunday, lasting until midnight.

If you are attending the Super Bowl or any of their events remember to always stay vigilant, and if you see something, say something.