New information has been released regarding the investigation into the mass shooting that occurred in Las Vegas, Nevada on October 1. Authorities now believe that Stephen Paddock had intended to escape after the attack, but he instead turned the gun on himself before authorities could breach his room. In addition, a note was found in Paddock’s hotel room which contained hand-written calculations on bullet trajectories. The calculations provided Paddock with information about where he needed to aim to improve his accuracy and identify the precise distance of his targets. Paddock had also setup cameras inside  and outside of his hotel suite, including in the door’s peephole, in order to monitor police movement. 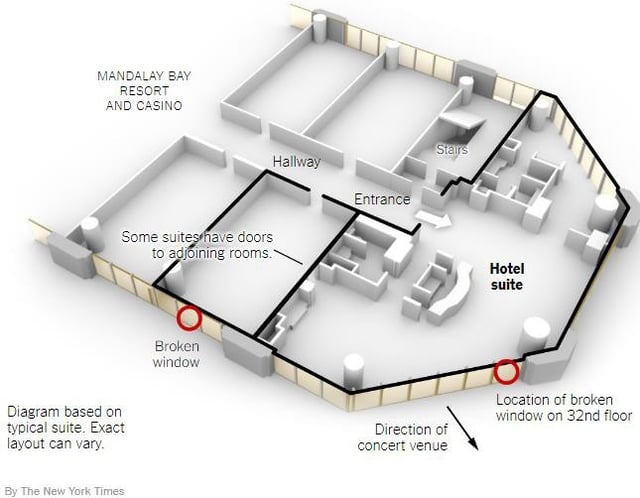 Authorities stated that Paddock had checked into the hotel by himself a few days prior to the attack, on September 28, with nine pieces of luggage and received staff assistance when transporting the luggage to his room. Over the next several days, additional luggage was brought to the room, totaling 15 pieces. During his stay, Paddock had ordered room service that was left outside his room.

A total of 23 firearms, in addition to ammonium nitrate (AN) and Tannerite, a binary explosive used for long-range target practice, were recovered from Paddock’s hotel room. Twelve of the rifles found in the room were equipped with a “bump stock,” a weapon modification that permits a semiautomatic rifle to fire rounds faster, mimicking the fire rate of an automatic weapon. A search of Paddock’s home led to the discovery of 19 additional firearms, explosive material, and several thousand rounds of ammunition. In addition, authorities found roughly 50 pounds of the explosive compound Tannerite and 1,600 rounds of ammunition inside of Paddock’s car. A total of 47 firearms were discovered across the three locations police had searched in connection to Paddock. Paddock also attempted to purchase a thousand rounds of tracer ammo from a gun show near Phoenix, AZ. Tracer ammo is used by shooters to increase their accuracy in the dark. With these tracer rounds, Paddock would have been able to see the exact destination of his bullets.

Investigators now believe that Paddock had likely planned to conduct additional attacks. Paddock’s use of cameras indicates that he was monitoring law enforcement’s response, and the cache of weapons and explosive material found in his car indicates that a secondary attack was likely planned. Paddock had conducted extensive preoperational surveillance of his desired target, determining which hotel provided the best vantage point, in addition to what floor and room would permit him to cause the greatest amount of casualties over a short period of time. Recent reports indicate that prior to checking in to the Mandalay Bay Hotel and Resort, Paddock had rented rooms at a condominium overlooking the Life is Beautiful Music Festival held between September 22 and September 25. Paddock had attended several other music festivals in Las Vegas prior to the attack, and booked hotel rooms in Chicago in August that overlooked the Lollapalooza music festival. He had also conducted research online of hotels surrounding Fenway Park in Boston, Massachusetts and near the Boston Center for the Arts. Although Paddock researched these locations, authorities have since stated that there was no indication he traveled in to Boston and Chicago.

Paddock’s surveillance of other largely populated public events suggest that he was possibly testing security measures of similar events that helped to select a more desired target. This tactic is also evident of dry-run attacks. When selecting the Mandalay Bay Hotel and Resort as his vantage point, Paddock likely assessed possible ingress and egress routes in order to identify the best way to escape and evade law enforcement. Paddock had also barricaded the stairwell door on his hotel floor, further delaying law enforcement response efforts as it took officers additional time to pry it open. The preoperational surveillance Paddock likely conducted allowed him to gather information regarding route options, target habits and patterns, accessibility of the target, and target vulnerability. It also helped determine what weapon would be best used in the attack in order to cause the most amount of casualties. Paddock’s focus on bullet trajectories, attempt to purchase tracer bullets, and his scoping out of potential targets have garnered further questions into how Paddock had received the knowledge and training to understand how to effectively use these firearms and to be able to determine the proper range and trajectory needed to successfully hit his target.

Paddock’s motive currently remains unknown, but authorities have confirmed that he had no ties to any international or domestic militant or extremist groups, despite the Islamic State of Iraq and the Levant’s (ISIL) unsubstantiated claim of responsibility for the attack. Paddock did not have a criminal history other than a series of minor and previously-resolved citations with Nevada Police. Investigators stated that a search of Paddock's computer, cellphone and other electronic devices, found no obvious ideological motive, no clear connection to extremists or activist groups or outward display of mental illness.