Dennis and PC are an Explosives Detection Canine (EDC) team that cannot be divided. They have worked together in Chicago for a little over 6 years. Dennis and PC served as an EDC team together at Super Bowl LI (51). They have both received certification as an Explosive Detection Canine Team from the North American Police Work Dog Association (NAPWDA) and the Department of Justice National Odor Recognition Test (DOJ NORT).

Dennis joined the marines in the early 80’s serving in Guantanamo Bay as a Fence Line Marine. He also served in Okinawa, Japan as a Correctional Custody Watch Stander Instructor and in Hawaii as Infantry Squad Leader. He immediately transitioned to the Montgomery Police Department, southwest of Chicago, after his service with the military.  Dennis has always had a strong interest in serving his community and becoming a police officer was a fun job for him. He attests that the most challenging part of the job was separating his personal feelings from the law, especially with his work as a juvenile officer. As for juveniles, Dennis taught the DARE program for 8 years, talking to 5th and 6th graders at different schools. He retired from the police department as a Senior Patrolman after 24 years on the squad. Dennis has been with MSA over 6 years serving as a bomb dog handler and performing some Executive Protection work as well. He is now an EDC Supervisor for the Chicago metropolitan area, managing EDC handlers at their posts. He loves working for MSA and really enjoys the company. 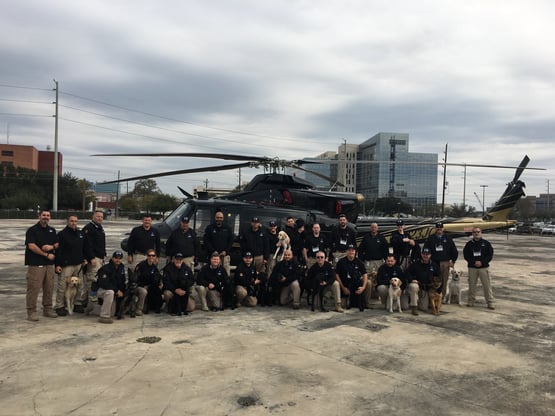 Dennis has 19 years of experience working with canines. While working for Montgomery Police Department, he had three German Shepherd dogs: Brando, Zanto, and LT. If you’re wondering what LT stands for, it’s “Little Tail” (his tail was amputated), as for the name PC the meaning is unknown. Dennis worked with LT until his retirement with the police department. He now works with his star teammate, PC.

PC is an 8-year old German Shepherd who is very close with his partner. Since his boss (Dennis) was promoted to supervisor, PC is now more of a part-time canine, but he still trains diligently every day. He loves to play ball and is a stellar swimmer - the best swimming shepherd Dennis has seen! He shares a home with two other dogs, a chocolate lab and a border collie. These days, PC spends more time at home bonding with his canine pals and Dennis’ 17-year old son.

Although it seems that this story is coming to an end with Dennis’ promotion, these two will always share a bond that cannot be broken. PC will enjoy his eventual retirement at home playing tennis along with his friends and as a wise fish once said, PC and Dennis will continue to, “Just keep swimming”. 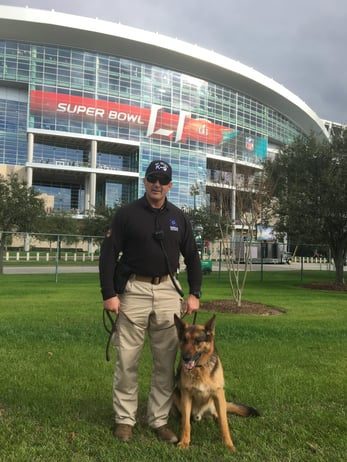