On January 12, 2020 MSA Security® was preparing for a canine detection demo at a cargo warehouse in Hong Kong. When entering the facility, Technical Detection Canine (TDC), Sarge pulled toward cargo that had previously undergone security screening via X-ray, not once, but twice. Sarge persisted, passively sitting next to the screened cargo several times, indicating to his handler that he had identified the odor of a lithium ion battery. His handler requested that the facility conduct additional screening, and after a physical search of the pallet, a lithium ion battery was found. Sarge proved to us again the incredible capacity of detection dogs in security screening. 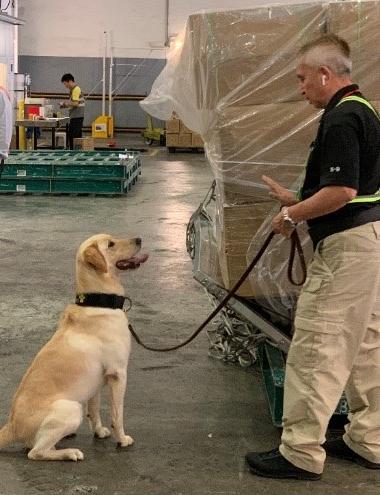 There is a growing cargo industry concern related to the threat presented by lithium ion batteries. This, combined with 2016 regulations governed by The International Air Transport Association (IATA) which prohibit lithium ion batteries on passenger aircraft, has resulted in increased focus on the need for technical detection screening in the cargo environment. With an unparalleled sense of smell, detection dogs have a unique ability to sniff out odors, smelling in layers, which allows them to recognize and discern an individual ingredient even when masked by other odors. A properly imprinted and trained canine can successfully detect any specific odor – including that of lithium ion batteries.

In fact, a TDC team is currently the only effective method for the discovery and identification of lithium ion batteries.

MSA Security® is the largest private provider of Explosive Detection Canine teams – known as Windsor Teams – in America. For over 30 years, we have adapted our world-class training methodology into a comprehensive aviation solution for technical detection.