In his nine years as an MSA Security® Explosive Detection Canine (EDC) Handler, Brandon Bowe has never used one single sick day. It is an accomplishment that he credits to a healthy lifestyle and passion for his work. That notable statistic is among many achievements that earned Brandon the Michael O’Neil Commemorative Award for Excellence in 2020. The award, named in honor of MSA’s former President, CEO and Chairman who led the company for over a decade prior to his passing in 2020, recognizes exemplary service, leadership and dedication. 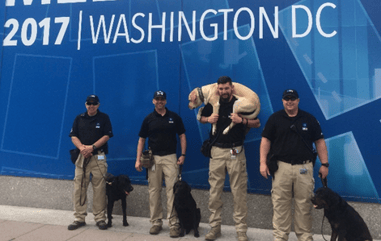 These qualities certainly serve Brandon and his ride-or-die canine partner, Stacey, well in their high-consequent work assignments. For nine years, the duo has assumed explosive detection duties in Washington, DC, at a global financial organization. They are one of more than 800 EDC Teams working for MSA, an Allied Universal® Company, around the globe each day to detect and deter explosive threats.

For this duo, the morning begins early with a brisk 1.5 mile walk and training before reporting for work at 7am. While assignments may vary, one thing is always for sure – Stacey’s nose touches everything that comes into the building. “We conduct regular perimeter patrol, vehicle searches and interior sweeps. Whether it is the mail, construction materials or a floral delivery, Stacey gets her nose on it,” explains Brandon. “She’s the best partner I’ve ever had for so many reasons, but her nose for explosive odor is truly top notch. She knows how to find odor and is consistently reliable even on the longest, busiest days.” In most environments, screening for explosives with an MSA bomb dog is more efficient than even the most sophisticated technology – sweeping large interior or exterior areas in a fraction of the time needed for X-ray or hand-held technology. 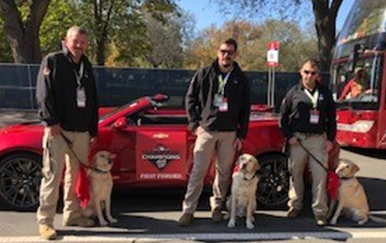 and says the two welcome opportunities for additional deployments at sports stadiums and entertainment events in the National Capitol Region. “We both love to work and understand one another inherently. I just need to give her a look or a head nod and she knows exactly what needs to be done,” says Brandon who was first introduced to bomb dogs while serving in the Marine Corps. 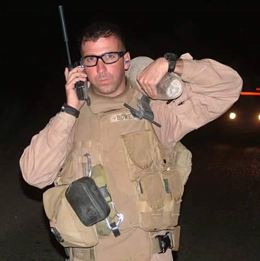 After enlisting and serving for 13 years, Brandon received a meritorious invitation to a college program where he became an officer. He was commissioned to second lieutenant in 2005. Before retiring in 2013, Brandon enjoyed a last assignment that paved the way for his career. As a captain and military police officer (MPO), he served as director of both the Military Police Officer school and the Inter-service Advanced Skills K-9 Course in Yuma, AZ. This three-week course hones military police K-9 teams’ skills before deployments to Afghanistan or Iraq, putting them through the rigors that teams should expect in a combat zone. After retirement, Brandon’s former director from the DC region reached out and invited him to take part in MSA’s comprehensive training program and become a handler. “I loved working with canines 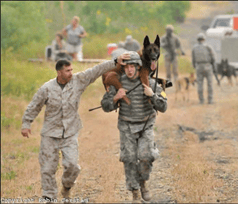 in the school environment and dogs were part of my team when I was deployed in Iraq,” explains Brandon. “It seemed like right next step in this journey.”

If there is any area where Brandon and Stacey differ, it might be their preference for how they spend downtime. Brandon relishes time off not so he can kick up his feet, but so that he can continue his education, pursue additional certifications and push himself further in physical training. Stacey? After a long day’s work, she is ready for a casual stroll through the park, a hearty dinner and a lazy couch assignment until bedtime.