When Eliezer Ramirez Sanchez and his canine partner, Tessa, retired together from the

police department after 23 years, the game plan called for plenty of sightseeing trips and long days at the beach. They were in Puerto Rico after all. Enchanting turquoise waters and soft, snow-white sand welcomed the pair with open arms. But before long, Eliezer began to miss the action. He says that a canine handler job posting by MSA Security® lured him back to a career he loves. “Nine of my 23 years on the police force were as a canine handler and I really enjoyed it,” says Eliezer. “I never realized that canine handlers worked outside law enforcement or the military. This was an exciting new opportunity in the private sector that made me feel excited and alive. I needed to pursue it.”

Fast forward to today, Eliezer and his canine partner, Quincy IV, are working in Puerto Rico as one of the hundreds of MSA Explosive Detection Teams screening cargo at a leading global freight forwarding company. The client partnership began following a successful 2016 pilot program established in anticipation of the U.S. Transportation Security Administration’s (TSA) Third-Party Canine (3PK9) Program. Results from the pilot program also provided important data to TSA and helped shape the 3PK9 program which launched in 2018. MSA was the first company certified as a CCSF-K9 provider. 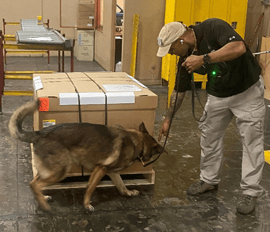 For Eliezer and Quincy IV, each day is a busy one. They are responsible for screening large volumes of freight ranging from small parcels to pallets. Eliezer credits his five-year-old German Shepherd partner for incredible energy and an eagerness to get the job done. “We have a very important job, especially right now with the escalating conflict overseas. Certifying that a cargo shipment is safe and secure is critical and we take that responsibility very seriously,” says Eliezer. “Quincy IV is a real powerhouse and never tires. Each morning, I look at him and see just how happy he is to go to work. That makes me happy too.” 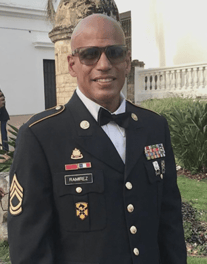 Like many of MSA’s canine handlers, Eliezer also carries military experience. With the U.S. Army Reserves for 23 years, he deployed three times to Iraq as a Motor Transport Operator (432 Trans Co). He operated heavy-duty all-wheel vehicles and equipment, and managed the loading and unloading of transported personnel and cargo. 88M MOS are the backbone of the Army National Guard's support and sustainment structure, providing advanced mobility on and off the battlefield. Many of the skills and disciplines gained through his time as a soldier help support his role today as an MSA EDC handler.

“Even as a young boy growing up in a small town in Puerto Rico, I dreamed of becoming a soldier. It was always my goal and I am grateful for the opportunity to serve,” says Eliezer proudly. “In the military, I learned commitment, dependability and teamwork, as well as many other skills that continue to serve me well today.”

While retirement was short lived for Eliezer, there is one activity that he promised himself would remain a priority. On his days off, he loves spending time with his wife of 18 years, Delilah Ocasio, and his former and current canine partners at the many beautiful beaches of Puerto Rico.