Just moments after asking John Hansen about his experience working with his canine partner Augusta, his disposition became clear—he is smitten. John and his 3 year old canine Augusta, an American Yellow Lab, have found great success and joy as an EDC team. 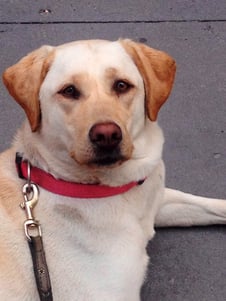 John has been with MSA since May of 2006. John comes to MSA with a wealth of experience in Law Enforcement, having served as an NYC Detective in Special Ops. John arrived at MSA as an Assistant FSO at Governors Island, but sensing that he needed a changed, opted to become an EDC handler.
As an EDC handler with MSA, John was paired with Augusta in January of 2014, when Augusta was 18 months old. Before training at MSA’s facility in Windsor, CT, Augusta trained with Guiding Eyes for the Blind in Morris County, NJ.  When talking about his relationship with Augusta, John says they have been a perfect match from the start, explaining that they “hit it off from day one”. 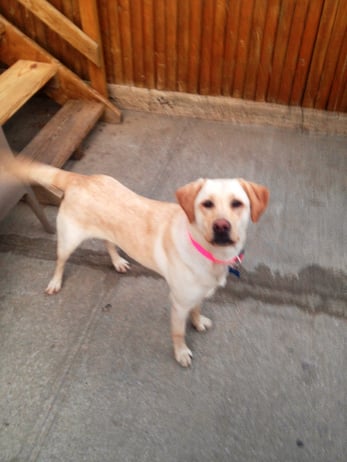 Though John says that Augusta has worked all over the city, the two are currently stationed at the New York Stock Exchange and Lincoln Center.  John gushes that Augusta, a food reward EDC, is loved by all wherever she goes and is occasionally spoiled by those around her.

John praises Augusta on her sociability and friendliness, but stresses that he is proud of Augusta’s work ethic and her ability to separate work and play.  Even mid-belly rub, if John says “Let’s go to work,” Augusta is ready to go.

Augusta hard at work at the New York Stock Exchange
“She’s a pleasure to work with,” John exclaims as he details how well Augusta works and forms relationships with other dogs on the job.  As much as John admires how personable Augusta is, he’s even more impressed with her capacity to do her job, and her ability to do it exceedingly well.  He notes that she is proactive in her searches and outstandingly eager to identify the scents on which she’s been imprinted.  He recalls a time when he and Augusta were going to search a truck and he couldn’t even get into the truck before her—she jumped five feet into the bed and bee-lined to the scent, where she ultimately had a find. When she identifies a smell she has been trained to detect, Augusta alerts John by pointing to the smell with her nose and then sitting still. While sitting beside a scent, Augusta is visibly excited to both impress her handler and, of course, to claim her food reward. 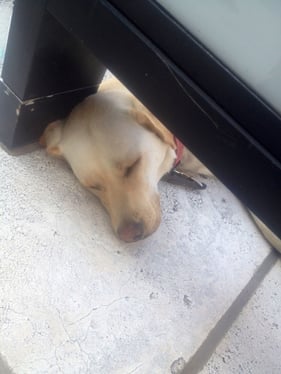 In their free time, Augusta and John play just as hard as they work.  John has another dog at home, a 12 year old lab named Hunter, as well as a rescued black cat, Cleo.  Augusta loves her furry house mates and the three enjoy spending time together.  John says that Augusta loves to play fetch and spend time with his three children.  He notes that Augusta is just as kind as she is hardworking, complimenting her ability to know when to be gentle around younger children. 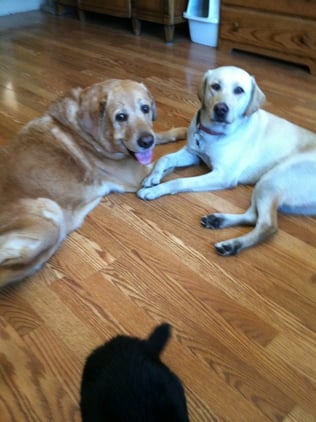 John says that any free time he gets he likes to spend fishing. Of course, Augusta and Hunter join him on the boat! John says that, when he can, he’ll take Augusta downstairs on the boat and let her sniff around so that she will be comfortable in her work environment if she was ever to search a boat or ferry.

Augusta and Hunter hanging at home

John is happy both in his position and with his canine partner. “I’m getting paid to play with a dog.” It really doesn’t get any better than that.  It’s clear that the two are very successful, both in their duties and in their ability to work so well together. 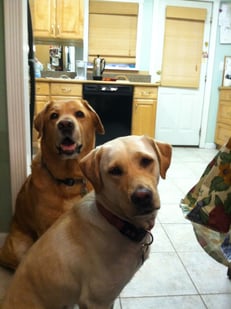 Augusta and Hunter
“I’m impressed with her every day,” John admires.