Jonathan Rubi boards a commercial American Airlines plane several times a day at least five days a week – but he never leaves the ground. As a canine handler with MSA Security®, An Allied Universal® Company, he and his partner, Hollis, are hard at work behind the scenes at one of the nation’s busiest airports. Their job is to sniff around. 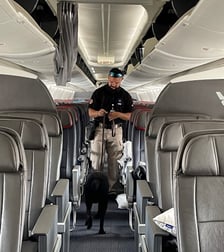 More than 80 airlines provide service to roughly 150 global destinations through Miami International Airport. In 2021 alone, over 17 million passengers used this international crossroad to travel for business or pleasure. But amid the hustle and bustle is the reality that commercial airlines are increasingly used for drug smuggling. That is where this MSA Security Canine Detection Team gets to work sweeping any of the hundreds of daily flights for this leading carrier and MSA client.

“Drug smugglers will go to great lengths to move their product,” says Jonathan who credits his 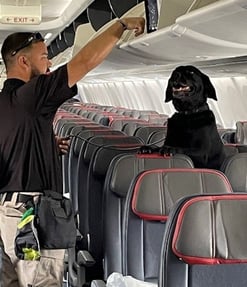 eight-year-old black Labrador for a mighty nose and consistently high energy. “Hollis is a powerhouse professional. She is the boss lady and knows what she’s after and works quickly.” And because smugglers are extremely clever when it comes to hiding drugs, the duo is sure to sweep every nook and cranny of the plane, including the cockpit, engines, hydraulics, avionics, and inside cabin and storage areas. Unlike a visual inspection conducted by human personnel, Hollis relies on her sense of smell, which research indicates is estimated to be at least 10,000 times more sensitive than that of a human being. She will alert Jonathan to the smallest trace of drugs that may hide in the most inconspicuous areas. This translates to greater efficiencies in labor, process and time, while also mitigating operational disruption.

Hollis is among a select group of MSA Narcotics Detection Canines. Like all of MSA’s more than 800 Canine Detection Teams, Jonathan and Hollis completed comprehensive training at MSA’s 75,000-square-foot flagship training center in Windsor, CT, where Hollis was imprinted and trained on the chemical components of drugs like marijuana, cocaine, hashish, heroin, ecstasy and methamphetamine. Operational training specific to their intended deployment followed and along with daily training with their designated handlers, MSA teams are also trained and tested regularly at one of seven MSA training centers throughout the country. This keeps all MSA canines consistently at the top of their game.

Before joining MSA, Jonathan served in law enforcement with the Manatee County Sheriff's Office on Florida’s west coast. Born and raised in Miami, he entered the police academy at just 19 years old with his associates degree and a vision of making a change in his community. He attributes his determination and drive to the encouragement received from his parents, Tania Fuentes and Francisco Rubi, and brother, Jordan Rubi. “My family was always a tremendous support system and through their example, I learned the importance of serving others. I took those lessons, my strong interest in law and athleticism to begin a career in law enforcement,” explains Jonathan. Growing up in Miami, Jonathan saw firsthand the challenges that existed between the community and police. “I wanted to be a driving force for change – a catalyst for helping build better and stronger relations,” he says. Throughout his tenure, Jonathan made that mission a priority and earned high marks from his superiors and fellow officers, serving in the Honor Guard, on the Special Response Team and as a Field Training Officer. 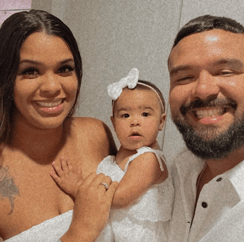 When they’re not working, you won’t find Jonathan or Hollis taking it easy at home. The bright blue skies, palm trees and golden sand of Miami lure the entire family outdoors for fun. He and his wife, Cecilia, enjoy staying active and are always ready for their next adventure. Right alongside is their eight-month-old daughter, Sarah, German Shepherd, Moana, and Hollis. As Jonathan proudly admits, these four girls always have him outnumbered and he loves it. “I wouldn’t have it any other way,” he says with a smile.