It takes stamina to keep up with a six-year-old. They seem to have energy for days, coupled with avid curiosity and an eagerness to please, making them an undeniable force. This is how Mark Scardilli describes the six-year-old in his life – who happens to be a German Shepherd named Lilo. Mark is a canine handler with MSA Security®, An Allied Universal® Company. He paired up with Lilo just a few months ago after his first canine partner, a black Labrador named Clare, retired from the bomb dog business for a more laid-back life at home in northern New Jersey. “Lilo is an enthusiastic partner who really keeps me on my toes with her strong work ethic and incredible sense of smell. She has an extremely sweet demeanor and loves to play,” explains Mark. 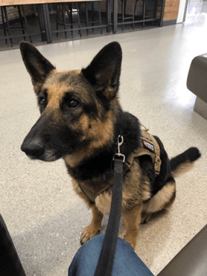 company’s seven regional ATF-licensed training centers throughout the country. They also complete regular sustainment training with their dedicated handlers every day. Rewards differ by breed. German Shepherds like Lilo are always looking for that bouncing tennis ball to play with. Labradors and Retrievers are hungry for a snack so food rewards keep them motivated. When we caught up with Mark and Lilo, the duo just returned from firearms imprintation and training in Pennsylvania with MSA partner, Shallow Creek Kennels and mark reports that the tennis ball was put to good use. “The training was comprehensive and rigorous, but Lilo is a quick study,” he says proudly.

To address the rising threat of active shooter incidents, MSA recently added Firearms Detection Canine Teams to its full suite of solutions. There are currently more than 800 DHS SAFETY Act designated MSA teams deployed around the world capable of detecting a full range of commercial and homemade explosives, including black powder used in firearms. Imprintation relies on odors unique to firearms, such as metals, oils and cleaning solvents. A properly trained firearms dog – with more than 300 million olfactory receptors in their nose – will successfully sniff out these separate odors to alert on a threat even if the gun has never been fired.

As a field supervisor for the New York City region, Mark manages detection teams out in the field to ensure optimal performance and results. This responsibility also includes assuming various deployments for himself and Lilo where they may be needed. Recently, the two flew to San Francisco to work a high-profile viewing party at a major league sporting event. “Everyone always loves to see Lilo, but we also do a great job at working without disturbing the normal flow of business or fan enjoyment,” explains Mark.

Prior to joining MSA seven years ago, Mark served in New Jersey law enforcement for 25 years, first as a canine handler in corrections and then as a county sheriff. Mark sees his return to canine handling as a real blessing. “I didn’t realize just how much I missed it until I joined MSA. I absolutely love working with dogs and am continually in awe of their incredible capabilities,” he says.

Mark’s love for dogs extends outside his career. When he is not working, you can find Mark kicking back under the gazebo in his backyard with his wife, Christine. Their son and daughter, 33 and 26 respectively, will often join them, as will their four-legged furry family members. They include Lilo, Clare, two Dachshunds and a Yorkshire Terrier. “It’s a crazy menagerie, but everyone gets along and I wouldn’t have it any other way,” says Mark.