Two-year-old yellow Labrador JC loves the Big Apple. At a moment’s notice, he is ready to take on Times Square, Broadway or any of the newest draws in Midtown. But JC is not there for the atmosphere and entertainment. He and his dedicated handler, Mike Racioppo, have important work to do. 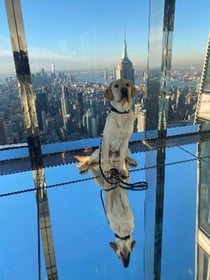 The duo is among more than 800 DHS SAFETY Act designated Detection Canine Teams at MSA Security®, An Allied Universal® Company, and happy to work hard each day keeping millions of people safe in the city that never sleeps. Currently, Mike and JC are deployed for screening at a premier office skyscraper in Midtown Manhattan. “We screen anything that comes into this building, whether it is carried in or delivered by a vehicle. This building has more than 90 floors that house businesses of all types and sizes. The days are extremely busy, but I’ve got a great partner. JC never tires and absolutely loves to work,” says Mike.

That strong work ethic combines with solid sniff capabilities and an experienced handler, making this team extremely strong in the field for both explosive and firearms detection. Recently, the team demonstrated their firearms detection skills to a select group of MSA Security clients by working a line of patrons in the city’s theater district. 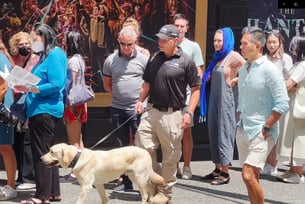 MSA added Firearms Detection Canine Teams to its full suite of solutions earlier this year. Imprintation and training take place in in Pennsylvania with MSA partner, Shallow Creek Kennels and rely on odors unique to firearms, such as metals, oils and cleaning solvents. A properly trained firearms dog will successfully sniff out these separate odors to alert – or sit – on a threat even if the gun has never been fired – and that is exactly what JC did in four out of four instances during this live demonstration. Good work boy!

All MSA canine handlers carry backgrounds in either military or law enforcement. Mike joined the company after retiring from a very active and distinguished 20-year career with the NYPD. He began as patrol and after earning rank as detective, spent seven years on the Bronx night watch. Prior to that, he served two years active duty in the U.S. Navy and says that it was his unwavering commitment to service that first attracted him to the military. “Even at a young age, I held a strong desire to serve others. It’s the reason I first enlisted in the Navy – I love my country and I wanted to do my part to protect it and the people who live here. That love of service then carried me into law enforcement and ultimately to my career here at MSA,” explains Mike.

Mike’s first canine partner was a golden Labrador named Hatter. He and Mike worked together for nearly four years before Hatter retired for a more laid-back life at home in Orange County, NY. When they’re not working, Mike and JC like to get a game of catch going in the backyard with Hatter and Mike’s black Labrador, Shadow. “These three are the best of friends and really get along great. Although JC is the youngest, he has an old soul. So while he thrives on being active, he never misses a chance to kick back and hang with his older brothers,” says Mike. In Mike’s downtime, he enjoys spending time with his wife, Tricia, and daughters, Victoria and Jessica. Mike is also an avid runner, which he says helps clear his mind and maintain good health. Throughout the years, he’s taken on a few 100-mile distance challenges. Although today, if JC wants to tag along on a run, they’ve agreed to keep it to a quick few miles.