They call Detroit, Michigan, the Motor City thanks to its historic recognition as the heart of the American automotive industry. You might say that MSA Security® Explosive Detection Canine (EDC) Team Rick Frederick and Champ II are living up to their own definition of what it means to be part of this iconic city. Their powerful engine is fueled with a strong work ethic. 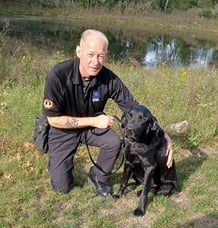 Rick, a Michigan-native and lead canine handler in Detroit, joined MSA in 2019. Following comprehensive training at the company’s flagship training center in Windsor, Connecticut, Rick and Champ II deployed to Detroit Metropolitan Airport (DTW) as one of the hundreds of MSA EDC Teams screening cargo for the U.S. Transportation Security Administration’s (TSA) Third-Party Canine (3PK9) Program. The airport is a leading transportation hub and volume is always at peak levels, keeping this team on their toes. Rick loves it and says that Champ II, a black Labrador who turns seven years old next month, is the best there is. “I am so grateful to have a partner that loves to work as much as I do,” says Rick. “The cargo environment is dynamic and fast moving. Champ’s intelligence and stamina help ensure we get the job done and maintain optimal operational flow.” A properly trained and imprinted canine will efficiently and effectively sweep even the largest areas of mail, packages, ULDs and containers by moving around them without the need to break down the configurations. This is an enormous time saver.

Rick trains Champ twice daily to ensure a high level of motivation and proficiency. All MSA teams are trained and tested on live explosives as often as once per month, a critical distinction to keeping MSA dogs best-in-class. Teams are also required to pass annual independent testing according to the North American Police Work Dog Association

Prior to joining MSA, Rick was semi-retired following 23 years of service with the Wayne County Sheriff’s Office as an explosive detection canine officer. Retirement was short lived however – by his own choice. “My work is incredibly rewarding. I feel a huge sense of satisfaction contributing to the security of others. I missed that usefulness in retirement and am grateful to be back in the business with MSA,” he explains. This drive to serve others was also central in Rick’s decision to enlist in the U.S. Navy. He served for six years as an operations specialist responsible for the operation of radar, navigation and communications equipment aboard the naval vessels. “I am proud to have served my country and for the valuable lessons learned throughout those years. Discipline, integrity and an ability to think strategically are areas that I continue to rely on today as a canine handler,” he says.

While work keeps Rick and Champ very busy, they do look forward to their downtime. On their days off, they like to take to the road for northern Michigan. A hike in the woods or a relaxing boat ride on the lake are the perfect opportunity to unwind. Right by their side are Rick’s 13-year-old German Shepherd, Stefi, who served four years in Iraq and seven-year-old chocolate Labrador, Gader. “They each have their own personalities but are the greatest friends. Their best days are spent together,” Rick says with a big smile.