Carter has been on the job for just five months, but this three-year-old German Shepherd is already a pro at sweeping cargo for explosives thanks to MSA Security’s extensive, five-phased operational training program and his handler, Bradley Kosiara. Each morning, after a power breakfast, this MSA Canine Team heads off to Chicago O’Hare International Airport, a leading international cargo airport that ranks second in the U.S. by value of shipments. The duo sweeps cargo for MSA client DHL Global Forwarding, and every day is a busy one.

Bradley and Carter are one of hundreds of MSA Explosive detection Canine Teams screening cargo at DGF sites nationwide. It is a partnership resulting from a 2016 pilot program created in anticipation of the U.S. Transportation Security Administration’s (TSA) Third-Party Canine (3PK9) Program and continues to prove successful. Intel from this pilot program also served valuable to the TSA, helping shape the 3PK9 program which launched in late 2018. In December of that year, MSA became the first company certified as a CCSF-K9 provider. 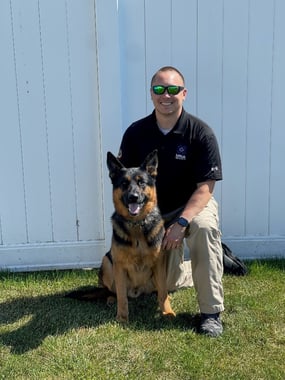 “Working with Carter each day is terrific. I am always impressed with his capabilities, temperament and eagerness to get the job done,” says Bradley. And the job is a big one. With their help, this facility processes thousands of pieces per hour, ranging from small parcels to palletized freight. Research throughout the years has consistently shown the superiority of canine screening. In fact, a Department of Defense DARPA research project in the early 2000s demonstrated canines were over ten times more efficient than other screening methods, including X-ray and explosive trace detection.

Bradley has been on this dedicated assignment in Chicago for two years, seamlessly integrating sweeps into existing shipping operations and processes. Before pairing up with Carter, he partnered with York, a Yellow Labrador who is now retired at the age of eight and lives at home with the Kosiara family. Bradley and York also worked within the city of Chicago for a year. Sports stadiums, financial institutions, landmarks, transportation entry points and city marathons are just a few of the many congested critical venues where this team deployed for regular explosive detection screening. “I really loved working with York and now I have a special bond with Carter. Because we work, live and play together, he is part of the family. My daughters love spending time with the dogs and insist every day that we go for a walk together after school.”

Bradley first experienced what it was like to be an EDC handler as a U.S. Marine. Joining the Marine Corps right after high school at the age of 17, he was deployed to Afghanistan for seven months and served as a machine gunner responsible for the deployment, care, mounting, and unmounting of heavy machine guns. From there, he was stationed in Japan and Korea. His final station was Marine Corps Base Camp Pendleton in California, one of the largest Marine Corps bases in the U.S. It was here where Sergeant Kosiara first trained as a canine handler to deploy and search for IEDs. 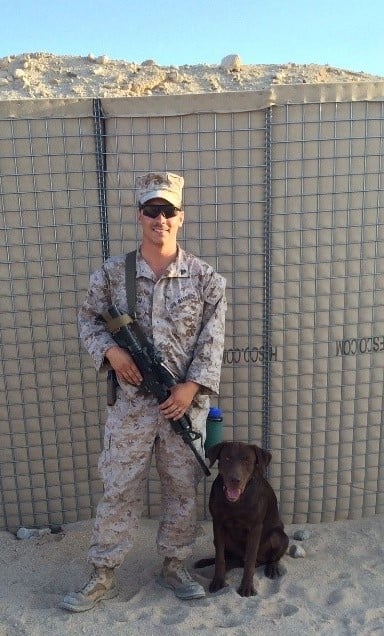 “I joined the Marines because of a strong personal desire to serve my country. I am proud of my service and appreciate the opportunity it gave me to experience what it was like to be a canine handler. I am also so grateful for the men and women who I served alongside. I made lifelong friends,” Bradley says. In fact, it was one of those friends who first found their way to MSA as a canine handler. “My buddy and I were catching up. He told me about what he was doing, how much he enjoyed it and that there were openings for experienced handlers. I was fortunate to secure an interview and land the job,” recalls Bradley. “Each night when I tuck my girls in and I see Carter and York ready to sleep alongside them, I can’t imagine myself doing anything else.” 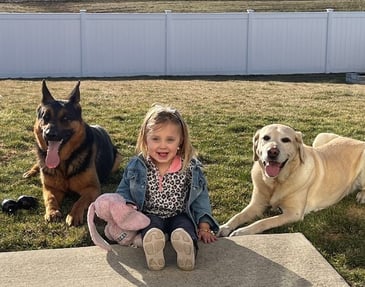