This week we go to Pittsburgh, Pennsylvania to visit another Explosive Detection Canine (EDC) team, Fran and Tasha. Fran and Tasha are a full time EDC team, ensuring the safety of personnel and property for one of MSA’s clients in the downtown area.
Fran has been with MSA since August of 2013. He joined the team after having retired from 20 years of dedicated service with the New York Police Department. He was stationed in Brooklyn as a Patrol Officer before being promoted to Detective in 2006. As a Detective, he worked in the Firearms Investigations Unit, which investigates gun trafficking cases throughout the metropolitan area and seeks to reduce the flow of guns onto the streets of New York City.

Fran credits his experience in the police department for providing him with a broad security background on “what to do if.” That is to say, while his focus is explosive detection, his law enforcement background has trained him to be quick and responsive in a wide range of emergency situations. Furthermore, Fran says it was during his tenure with the NYPD that he honed his strong “people skills” which aid him in his current job, as he interacts with a wide range of people on a daily basis. 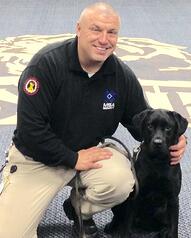 Fran’s EDC, Tasha, is a graduate of the Puppies Behind Bars program and MSA’s proprietary EDC training program. Tasha, an English Black Lab, will turn 3 in June this year. She and Fran were introduced at MSA’s training facility in Windsor, CT. It's the first go at canine detection for the both of them. In fact, immediately after beginning MSA’s handler training program, Fran recognized the potential for a great relationship with Tasha and requested to be paired with her. Though she was still a bit young and restless at the time, Fran says she has settled down and the two have developed a fruitful working relationship. “Anyone can see that Tasha enjoys what she does and she’s very good at it,” Fran tells us.

Tasha is sweet natured and loves kids. She is a food reward dog, so she doesn’t receive treats, but she loves to play. Often times she will spend her breaks at work playing with children visiting or passing through the job site. She loves tug of war, fetch, and – like most labs – eats up all the attention she can get. Tasha and Fran stay in shape together by going jogging on local hiking trails 3 to 4 times a week.