Thomas Hickey serves as one of MSA Security’s Field Trainers. He works out of MSA’s Training Facility in Orangeburg, New York, one of five regional facilities located across the country. His role requires him to conduct routing testing and training of Explosive Detection Canine teams. This includes Quality Assurance Testing, Initial and Remedial Training, Annual Certifications, and Third Party K9 Practice Training Regulations (3PK9 PTRs). Outside of Orangeburg, Thomas administers Post Visits/Training and 3PK9 Internal Audits. On a day-to-day basis, Thomas provides valuable guidance and feedback to all of his trainees. The role requires exceptional communication skills, a high level of canine knowledge, and extensive experience in explosive detection. 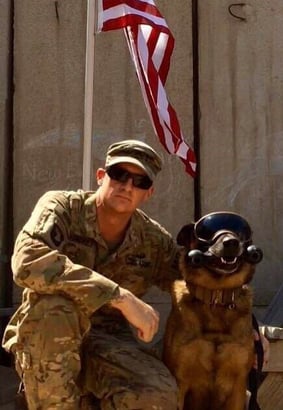 Prior to becoming a valuable member of MSA, Thomas enlisted in the US Army in 2011. Upon graduating basic training, Thomas arrived at his first station in Fort Drum, NY. He was selected to attend Military Working Dog School in Lackland Air Force base in San Antonio, Texas.  In order to be selected, candidates are required to complete a series of tests. The Armed Services Vocational Aptitude Battery (ASVAB), distinguishes specific strengths and talents of individuals. Thomas Hickey, graduated “Top Dog”, a title received for graduating top of his class. In January 2013, he was stationed in Fort Knox, Kentucky where he held the titles as the Senior Dog Handler, Team Leader, Squad Leader, and Training NCO (Non-Commissioned Officer).

After passing a 72-hour try-out, Thomas and MWD Jack landed themselves a spot on the Fort Knox Special Reaction Team. The U.S Army Special Reaction Teams (SRTs) consist of military police that are trained in crisis response at Army installations. As a member of this elite team, Thomas and Patrol Explosive Detection Dog Jack R445 were trained to respond to active shooters, barricaded suspects, hostage rescue, counter terrorism, and sniper incidents. While serving on this team, they were deployed overseas to Kuwait, Qatar, and multiple locations in Iraq.

As a handler in the military, Thomas also worked on various missions for the secret service involving the Pope, John Kerry, Vice President Joe Biden, President Obama, and President Trump in different states. During his active duty time, he exemplified highly admirable notions for the US Army. His notable military and dog handling background has provided him with the utmost preparation to begin working for MSA Security. In April 2017, Thomas attended the unrivaled NHT (New Handler Training) program in Windsor, Connecticut, where he was paired with Explosive Detection Canine Otis. Together, Thomas and EDC Otis created a bond that was not only inseparable but ensured the cohesiveness required for efficient detection work.

Thomas Hickey is of great worth to our MSA team, and serves as a thought leader within the industry. He continuously renders commendable leadership and serves as an exceptional role model for this position.