Over just the past few weeks, there have been a number of very public active shooter events throughout the country. One of the most publicized was the shooting of a Virginia Reporter and Cameraman who were murdered on live television. Stories like this should start the conversation about active shooter prevention. After a major fire at Our Lady of Angels elementary school in 1958, states began to mandate fire drills; so far in 2015 we have had 273 active shooter incidents out of 258 days. Like fire drills, active shooter drills should be performed regularly.  It is important to implement these types of drills into your workplace, and especially in schools.

The Department of Homeland Security defines an active shooter as "an individual actively engaged in killing or attempting to kill people in a conﬁned and populated area; in most cases, active shooters use ﬁrearm[s] and there is no pattern or method to their selection of victims." In most cases an active shooter event only last about 10 – 15 minutes. By the time police arrive it can be half way or if not completely over. Preparation prior to a potential event is the key to saving lives. 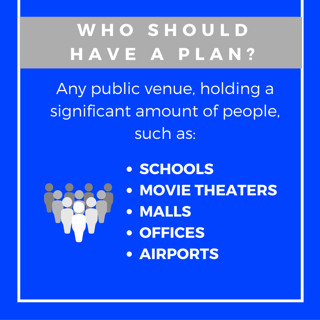 Back to school is officially in full swing, and a great time to talk about active shooter drills/programs. From the FBI’s Study of Active Shooter Incidents in the United States Between 2000 and 2013, “incidents in educational facilities account for some of the higher casualty counts.” In this report 160 incidents were reported between 2000 and 2013, 39 of them occurring in educational environments (27 schools, 13 higher education institutes). The highest casualty counts occurred at Virginia Tech, Sandy Hook Elementary School, Northern Illinois University, and Santana High School.

In 2013, in the wake of the Sandy Hook shooting, MSA developed our “Golden 15” Strategy to help schools improve their security and ability to survive active shooter events. This strategy can be adopted for business environments also. “Unfortunately, the active shooter phenomenon has been growing both in number in lethality in recent years,” says MSA’s CEO Michael O’Neil. MSA has studied the active shooter significantly and developed detailed response strategies to increase chances of survival in these situations.

To learn more, download our cut sheet on the “Golden 15”.