Interdiction of Terrorist Planning and Surveillance

Counter-terrorism experts have studied the 7 steps terrorists take in their attack planning cycle for many years. They include: Broad Target Selection, Intelligence and Surveillance, Specific Target Selection, Pre-Attack Surveillance and Planning, Attack Rehearsal, Action on the Objective, and Escape and Exploitations. Historically, these steps were completed in meticulous detail and took years of planning prior to the attacks. With regard to the September 11th attacks, Khalid Sheikh Mohammed, principal architect, first presented the idea of using planes in an attack in 1996. The Hamburg cell was chosen in 1998 and they began to arrive in America at the start of 2000. 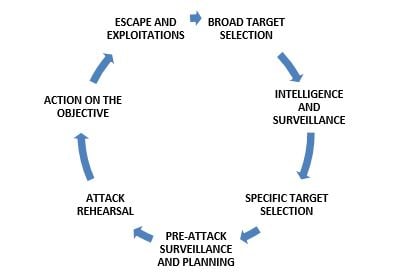 The timeline of planning for today’s attacks, now often perpetrated by Homegrown Violent Extremists (HVE), is highly expedited. HVEs are nationalized citizens or residents of Western countries and often live in or near the targeted cities. The HVE is someone who blends into his environment and operates in plain sight. They are enemies from within, and invisible foes. They have knowledge of the streets and terrain and do not need weeks or months of pre-operational surveillance. Furthermore, they are able to complete a lot of preoperational planning on open source websites limiting the amount of time spent on the ground at target locations.

The window of opportunity to observe surveillance has diminished. It is now more important than ever for companies and organizations to quickly detect potential hostile surveillance activity. This requires a highly trained and professional Hostile Surveillance Specialist Plus (HSS+) Operative on site. This individual should have substantial training and prior experience, and should maintain an acute awareness of the evolving global threat spectrum. A skilled HSS+ Operative is an invaluable asset to any security plan.