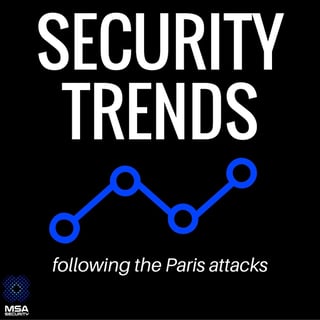 In the aftermath of the Paris Terror Attacks that took place in November, and similar incidents around the globe, venues and arenas are stepping up their security practices to combat the emerging threat environment. Security precautions such as walk-through and handheld metal detectors, pat downs before entering venues, and bag checks are effective ways to deter potential attacks. The public has embraced the more widespread implementation of these precautionary measures because it conveys a sense of safety and securitythat allows the public to enjoy concerts, movies, or theme parks. In fact, following the Paris incident, 1 in 3 Americans now worry about an attack happening at a live event according to a survey conducted by the digital marketing platform SpinGo. More than half of those that participated in the survey said that security measures need to be increased. Venues and arenas are actively working to address the public’s concerns.

Metal detectors are becoming increasingly popular security measures.Theme parks such as Universal Studios, Disney, and Sea World have all implemented metal detectors at their front gates. According to Universal spokesman, Tom Schroder, this is not due to any specific threat, but instead a preventative measure that adds another level of safety to ensure guests feel safe while enjoying the parks.  While theme parks, specifically Six Flags, have deployed metal detectors as a component of their security plan since 9/11 there has been an increasing demand for stricter security measures across the industry. Universal, Disney, and Sea World have experimented in the past as well, but in light of recent event these measures will continue to be the basic standard for security. In the similarly public world of professional sports, the MLB and individual teams such as Orlando Magic deploy metal detectors. The NFL has implemented a clear bag policy which only allows guests to bring clear plastic or vinyl bags into the stadiums.

Many large concert venues already had extensive security plans in place. However, after the attacks targeting smaller music halls in Paris, smaller venues in the United States are trying to beef up security. Even club owners, like Mitch Edelson of Los Gobos in Los Angeles, California, are adding bag checks, periodic metal detectors, and more uniformed security officers. At the recent Billboard Magazine conference about touring in the music industry, the Department of Homeland Security facilitated discussions on security and concert tours.

As business owners, it is important to ensure your facilities and events are safe and secure. The recent threat environment has spurred the increased security within the entertainment industry and it does not seem as though the growth will slow anytime soon. MSA’s own Michael O’Neil stated, "You have to look at every level of your security program and ask what am I doing to make sure I'm a 'hard target’.  If you're doing things to make an attack harder, terrorists may flex to a softer target."